NEWAYGO COUNTY, Mich. — Investigators have determined that a series of bank robberies ranging from June of 2011 to September of 2013 and spanning multiple counties, is all the work of one serial bank robber.

Police have provided information and surveillance images obtained from each of the four robberies:

One June 3, 2011, the Lake Osceola State Bank in Luther (Lake County) was robbed at gunpoint.  The suspect was wearing a hat, sunglasses, and was carrying a black handgun.  He brought three bags to transport the stolen cash. 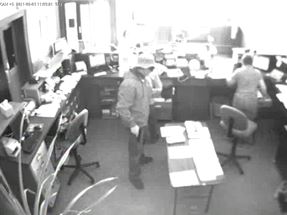 On June 22, 2011, the Lake Osceola State Bank in Wellston (Manistee County) was robbed at gunpoint.  The suspect was wearing a cap with an “M” logo on it, sunglasses, and had brown hair that was later determined to be a wig.  As in the first robbery, he had a black handgun and used three bags to load the cash.  He also used a stolen vehicle, and police believe he had an accomplice.

On November 16, 2011, the Citizens National Bank in Pellston (Emmet County) was robbed at gunpoint.  The suspect wore a puffy coat, bomber fur hat, and aviator sunglasses.  He again had a black handgun, used a stolen vehicle to commit the robbery, and police believe an accomplice was once again involved.  Only one surveillance image was obtained.

On September 3, 2013, the Independent Bank in Croton Township (Newaygo County) was robbed at gunpoint.  The suspect was wearing a black Gears of War video game hat, possibly a wig underneath, and carried a black handgun.  He once again used a stolen car to commit the robbery, and police believe he had an accomplice.

Police are seeking tips from the public to help identify this serial bank robber.  Anyone with information is encouraged to call the Newaygo County Sheriff’s Office at 231-689-7303, the Emmet County Sheriff’s Office at 231-347-2036, the FBI Traverse City Office at 231-946-7201, or Newaygo County Silent Observer at 231-652-1121.  A reward in the amount of $35,000 is available for information leading to the identification, arrest, and conviction of those responsible for these bank robberies.

Police are also urging banks, especially those in rural communities, to increase security measures and decrease the amount of readily available cash.  Below is a map of the banks that were targeted.