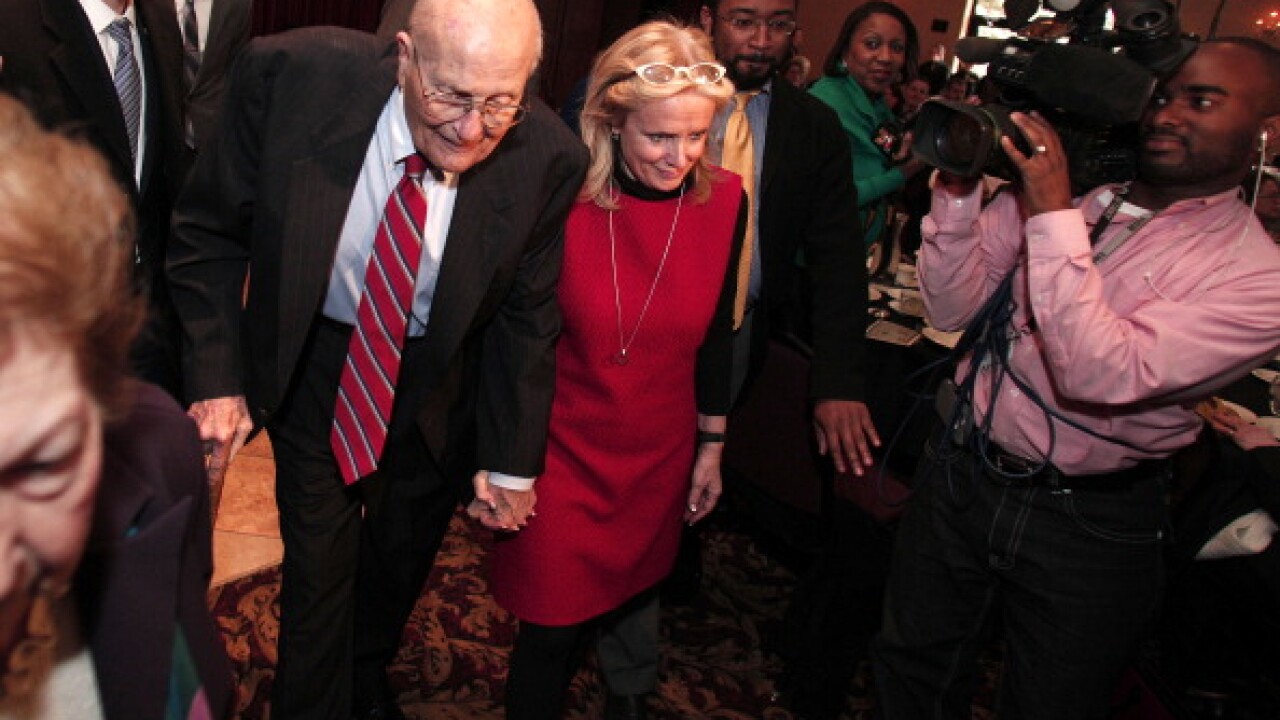 SOUTHGATE, MI – FEBRUARY 24: U.S. Rep. John Dingell (D-MI) , 87, the longest serving member of Congress in U.S. history, walks to the head table with his wife Debbie before announcing his retirement at a luncheon February 24, 2014 in Southgate, Michigan. Dingell began serving in Congress in 1955, taking over the seat his father vacated. (Photo by Bill Pugliano/Getty Images)

WASHINGTON (CNN) — Democratic Rep. Debbie Dingell said Thursday that President Donald Trump's attacks on her and her late husband Rep. John Dingell will not intimidate her and that she doesn't want an apology from the President.

Trump, speaking at a rally Wednesday night in Battle Creek, implied the former congressman, whose seat is now held by his wife, was "looking up" from hell. He said that he gave the family the "A-plus treatment" after John Dingell died, and that the congresswoman told him during an emotional call following John Dingell's funeral that her husband would have been "thrilled" by the respect shown for him during his funeral and "he's looking down" on the ceremonies.

Dingell, who on Wednesday accused Trump of exacerbating her grief going into the holidays without her husband, said Thursday she didn't want to "get into any politics" when asked if she wanted an apology from the President.

"It is still something that I'm really grieving over," she said. "This Thanksgiving was really hard and Christmas is harder. And I'm going to go back to doing my job and doing a good job for the people of my district.

'PEOPLE FORGET WE ARE HUMAN BEINGS'

In an interview later Thursday on CNN's "At This Hour," Debbie Dingell said that after hearing the President's comments, she immediately "kind of felt kicked in the stomach."

Asked by Bolduan why she was so open in her Wednesday tweet about how the attacks weighed on her, the congresswoman said it was because "sometimes people forget that we're human beings."

"The United States House of Representatives and the Senate are representative bodies. We're not perfect. We're human beings that go through the same experiences that the people that we represent do," she said in the interview, which at one point moved Bolduan to tears after Dingell noted that she misses her late husband and that it'll be "a lousy Christmas" without him.

Trump's comment about John Dingell, the longest-ever serving congressman, fell mostly flat on a crowd in an important swing state that has long revered the former dean of the House. John Dingell, who died in February, was an iconic figure in Michigan who was admired across party lines, and was one of the most popular political figures in the state during his lifetime.

Trump's rally insults marked the second time in five days that he has mentioned John Dingell's funeral while disparaging the congresswoman, who has supported impeachment. Last week, he tweeted that the last time he had spoken to Debbie Dingell was following the funeral, and that she was "really pathetic" for her involvement in the impeachment proceedings.