Trump and Biden will be considered for 2021 prize 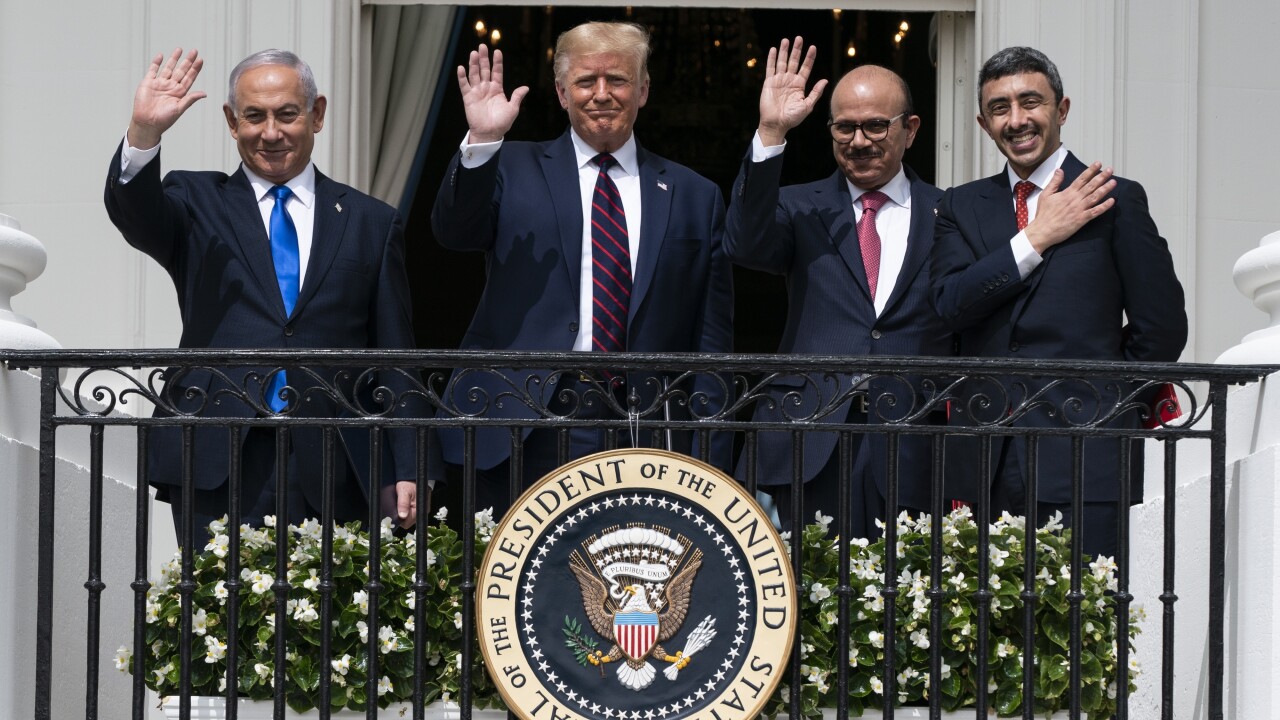 Copyright 2020 The Associated Press. All rights reserved.
Alex Brandon/AP
FILE - In this Tuesday, Sept. 15, 2020 file photo, Israeli Prime Minister Benjamin Netanyahu, left, U.S. President Donald Trump, Bahrain Foreign Minister Khalid bin Ahmed Al Khalifa and United Arab Emirates Foreign Minister Abdullah bin Zayed al-Nahyan pose for a photo on the Blue Room Balcony after signing the Abraham Accords during a ceremony on the South Lawn of the White House in Washington. Saudi Arabia insists officially that there can be no formal ties with Israel before Palestinian statehood is achieved, but state-backed media and clerics have softened their tone toward Jews and there has been no official condemnation or criticism of the deals signed by the UAE or Bahrain with Israel. (AP Photo/Alex Brandon, File)

President Donald Trump has been nominated a third time for the Nobel Peace Prize, this time by a group of Australian lawyers who praised his role in brokering a peace agreement between Israel and the United Arab Emirates (UAE).

“What he has done with the Trump Doctrine is that he has decided he would no longer have America involved in endless wars, wars which achieve nothing but the killing of thousands of young Americans and enormous debts imposed on America," Australian legal scholar David Flint told Sky News Australia on Sunday.

President Trump was first nominated for the 2021 Nobel Peace Prize by a Norwegian Parliament member for his role in the UAE-Israel peace deal early in September. Then, a Swedish Parliament member nominated Trump after he helped secure a deal for normalized economic relations between Serbia and Kosovo.

Also this week, former Vice President Joe Biden was nominated for the Nobel Peace Prize by a member of the British Parliament.

“When others have resorted to violent solutions, he has argued that the best force is the force of argument,” Chris Bryant told the Evening Standard. “Because guns can stop a heart but well-placed words can change many hearts, and many hearts can change a world.”

The Norwegian Nobel Committee begins accepting nominations in September for the following year. The deadline to submit a nomination is February 1 for the year of the award. Winners are then announced in early October.

Both Trump and Biden’s nominations will be considered for the 2021 prize.

There is no minimum or maximum number of nominations a person or group needs in order to be considered for the Nobel awards.

The Nobel Committee has a 50-year secrecy rule on naming nominees. The group will not release the name of any nominee to the media, to the nominee themselves, or anyone until after 50 years.

“In so far as certain names crop up in the advance speculations as to who will be awarded any given year’s Prize, this is either sheer guesswork or information put out by the person or persons behind the nomination,” the committee states on their website.

According to Alfred Nobel’s will, the prize recognizes someone who has "done the most or the best work for fraternity between nations, for the abolition or reduction of standing armies and for the holding and promotion of peace congresses".