The troops abandoned their posts at the Simon Bolivar International Bridge on the Colombia-Venezuela border and requested help from Colombia’s immigration officials.

Also Saturday, soldiers with Venezuela’s National Guard fired tear gas at workers who were demanding to cross the border at Ureña into Colombia to work, according to a CNN crew that witnessed the scene at the Tienditas Bridge.

The workers faced off with the soldiers, chanting, “we want to work!” before being dispersed by the tear gas. Men with shirts covering their faces started throwing rocks toward the guard.

These tense scenes played out Saturday, a day after violence broke out at a Venezuelan town near the border with Brazil over aid delivery, leaving two people dead and 17 others injured, local authorities said.

Tensions are running high at Venezuela’s borders amid opposition plans to usher aid into the country this weekend in defiance of President Nicolas Maduro’s wishes. Maduro called on Venezuelans to “mobilize” Saturday. “Let’s all take to the streets to defend our independence with conscience and joy,” Maduro said on his official Twitter account. 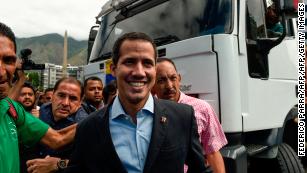 On Friday, a standoff occurred between a local indigenous community and the military over aid delivery near Gran Sabana, on the Brazil-Venezuela border, said the town’s mayor, Emilio Gonzalez. He told CNN the military opened fire on an indigenous group trying to facilitate the passage of aid into Venezuela.

National Assembly member Americo De Grazia said on his official Twitter feed that two people had died. The second victim was an indigenous man, according to De Grazia.