HAMILTON, Mich. - Two gas stations were robbed early Monday morning in West Michigan and police believe they may be connected.

The Allegan County Sheriff says that at about 6:45 a.m. Monday a suspect robbed the Hamilton Mobil Mart at 3604 M-40 in Hamilton.  The Holland Police Department reported that they had a similar robbery at the Holland Mobil Mart at 1122 Lincoln Avenue.

The suspect is described as a dark-skinned man, about 5'6" to 5'7" tall, 140 lbs., and was wearing a dark jacket, blue jeans, a camo-colored face mask and black and white Converse Chuck Taylor tennis shoes. Police say that a handgun was shown in both incidents.

The Holland Police Department released these surveillance photo of the suspect. 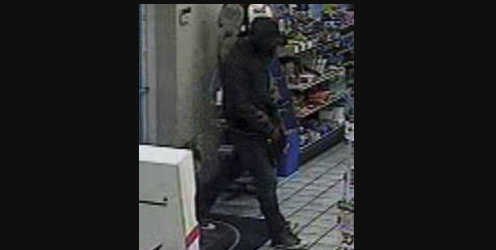 Police say the man left both scenes in a silver, four-door sedan. A photo of that vehicle is below.

Just before 12:30pm, Allegan County Sheriff's Deputies responded to another call where somebody was confronted at their home by someone matching the suspect's description.

“We’ve obviously had several calls that we believe were related, the second one came at 12:26pm where an individual confronted somebody that was kind of looking around the vehicles in their yard, that subject then asked to use the phone and they were asked to leave by the homeowner, so they left," said Mike Larsen, Allegan County Undersheriff.

Monday afternoon, the Allegan County Sheriff posted on Facebook that the suspect may have stolen a 1999 black Honda Shadow 1100 motorcycle and was last seen northbound on 43rd Street from 19th Avenue.  The suspect in the motorcycle theft was described as a white man with dark hair and clothing.

Deputies believe the suspect ditched the Converse sneakers earlier in the day.

“At 3:40pm we received a call that somebody got home and found that their doors to their house were open and that there were a pair of muddy shoes and socks outside one of the doors and it looked as though someone had been inside the residence, but were no longer currently there," said Larsen.

The public should consider the suspect armed and dangerous.

“This is the first time that we’ve had larcenies from homes, breaking and entering’s and armed robberies from retail places, in quite some time," said Larsen." The fact that they are all in such close proximity shows that this person is pretty bold or not thinking clearly due to some substance or something, which then also heightens the level of security and caution that we want people to take," said Larsen.