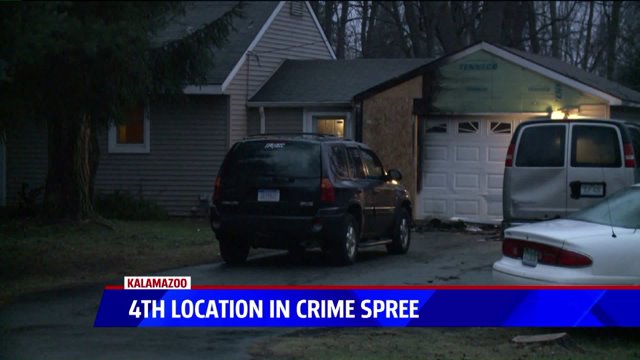 KALAMAZOO COUNTY, Mich. -- The man accused of going on a crime spree in Kalamazoo County Tuesday morning allegedly made a fourth stop before being arrested.

On Wednesday, FOX 17 learned that Steppenwolf is related to two convicted killers: Monk Steppenwolf, who also goes by Larry Ranes and is

Investigators say Matthew Steppenwolf started a fire at a home off East G Avenue in Cooper Township after he robbed a Citgo gas station around 9:30 a.m. Following that fire, they say he went to a home off Monterey Drive where he got into some kind of altercation with a family there and shot a woman in the chest.

Relatives say that victim, Betty Jo Brewer, 49, is recovering at the hospital and is alert and speaking.

Following the shooting, police say Steppenwolf hijacked a car on Drake Road near Kalamazoo Central High School before eventually crashing into a tree in Climax around 11:30 a.m. Investigators took him into custody without further incident.

Nearby schools were locked down as a precaution during that carjacking and crash.

"Because of the magnitude of the situation and some of the dynamics, the unpredictability, that’s why the schools were put on lockdown," said Kalamazoo Public Safety Chief Jeff Hadley.

Steppenwolf is expected to be arraigned in connection to that crime spree on Thursday.