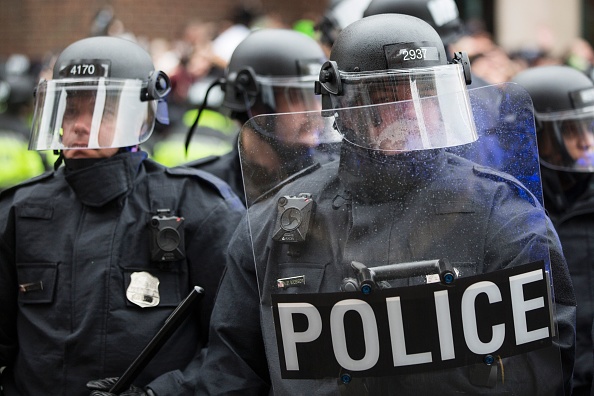 WASHINGTON (AP) — Police have used pepper spray and made a number of arrests in a confrontation with protesters in downtown Washington, D.C.

At one point, police gave chase to a group of about 100 protesters who smashed windows of downtown businesses including a Starbucks, Bank of America and McDonald’s as they denounced capitalism and Donald Trump.

Police in riot gear used pepper spray from large canisters and eventually cordoned off the protesters.

They say the demonstrators damaged vehicles, destroyed property and set small fires while armed with crowbars and hammers. According to police, “numerous” people were arrested and charged with rioting.

The confrontation happened about an hour before Trump was sworn in and began giving his inaugural address. Several hours later, the crowd of protesters still at the scene had grown to about 1,000. Some wore gas masks, and had arms chained together.

The DisruptJ20 coalition, named after the date of the inauguration, had promised that people participating in its actions in Washington would attempt to shut down the celebrations, risking arrest when necessary.

Earlier, peaceful demonstrations had unfolded at several security checkpoints near the Capitol as police helped ticket-holders get through to the inaugural ceremony.