HOLLAND, Mich (April 22, 2014) – The Holland Department of Public Safety has released surveillance images of a man they would like to talk to regarding recent graffiti complaints on the south side of the city.

Investigators say these images were captured on April 14.

If you recognize this man, you’re being asked to contact the Holland Department of Public Safety at 616-355-1100, or email your tip to Policetips@cityofholland.com. 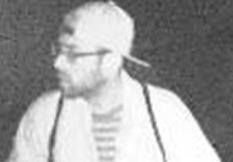