Prosecutor: No charges to be filed in hotel fire that killed six 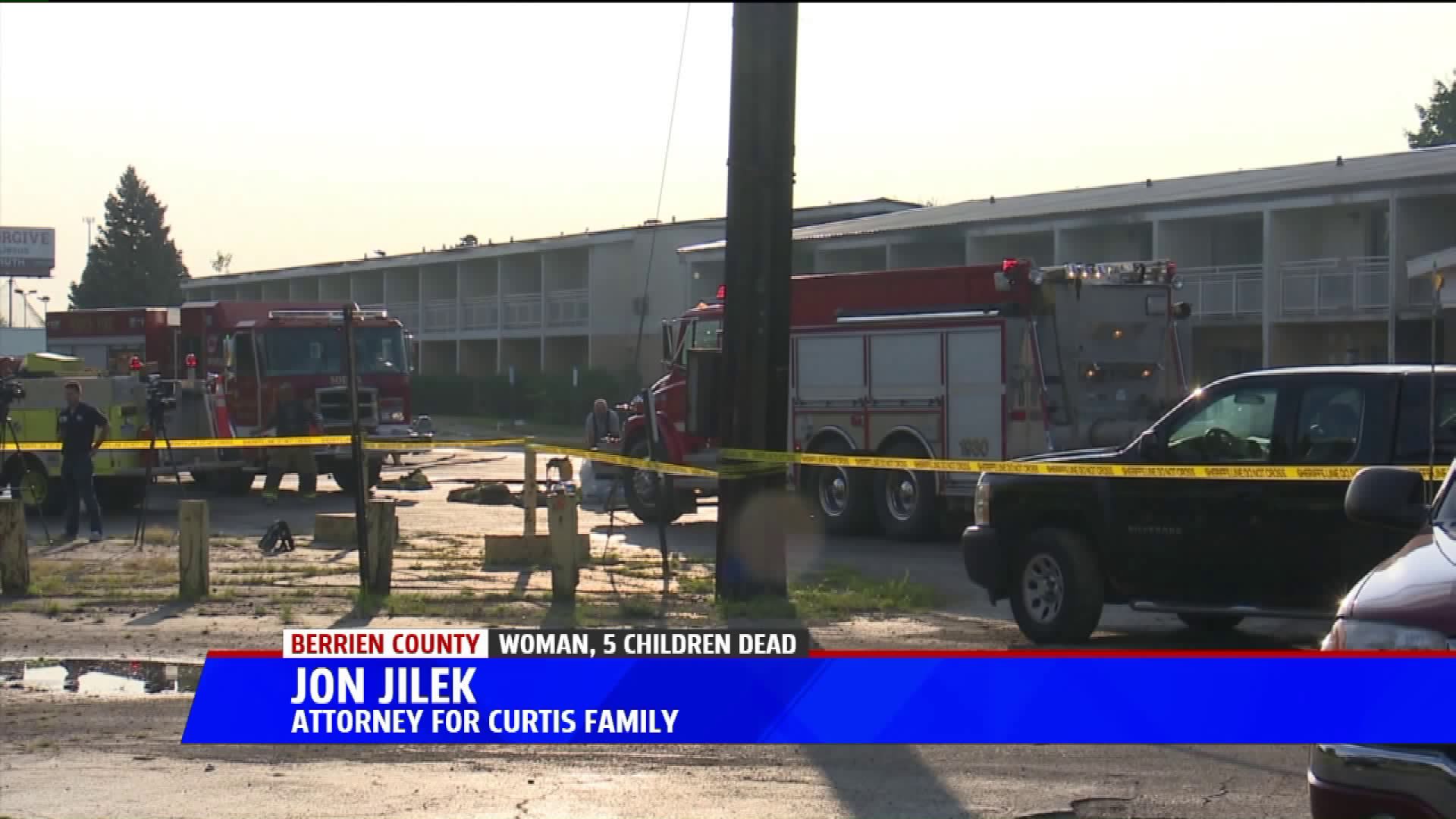 ST. JOSEPH, Mich. - The Berrien County Prosecutor says no criminal charges will be filed in a fire that killed a mom and five children last summer.

Kiarre Curtis, and her children Avery, 2, Savod, 4, Samuel 5, Gerome Randolph, 7 and Marquise Thompson, 10, died in the fire at the Cosmo Extended Stay Inn on July 28, 2018. All six died from smoke inhalation. Samuel Curtis and his and Kiarre's daughter Autumn, 1, survived.

Prosecutor Michael Sepic says that the investigation shows that the fire started in room 135 by a resident using a hot plate. The Curtis family was in room 212. Residents started knocking on doors to alert others, but smoke quickly filled the hallway.

Sepic says that the building owner, Sodus Hospitality, Inc., did have smoke alarms in the rooms, but some were functioning and others were not. He says that because the hotel was an extended stay hotel, many residents had disconnected the smoke alarms in their rooms. Also, while two residents said they pulled the fire alarm system, inspectors say there was no evidence that it was activated.

Sepic says that the building was inspected in 2016 and the owners were asked to correct some safety components and the owner had complied.

Sepic says that there was no evidence of criminal negligence, so no charges will be filed.

In response to the decision, the law firm representing the estate of those killed in the fire, Koning & Jilek, P.C., made the following statement:

"We represent the estates of those killed in the Cosmos Extended Stay Motel fire.  Our understanding is that the Berrien County Prosecutor submitted a press release indicating that there would be no criminal charges sought in the July fire that resulted in the death of Avery Curtis, age 2, Savod Curtis, age 4, Samuel Curtis, age 5, Gerome Randolph, age 7, Marquise Thompson, age 10, and Kiarre Curtis, the mother of the children, age 26.  Given the nature of and the conclusions made in the release, a response is necessary.

Discrimination can be subtle or overt.  Overt discrimination is easy to see and more easily condemned.  Subtle discrimination was the cause of the decision not to charge the owner of the Cosmos Extended Stay Inn for six deaths that occurred over one year ago.  Poor black people do not get the same consideration, either as perpetrators or victims.

While there is little dispute that race and poverty play roles in our society’s decision making, parties should restrain themselves from quickly “playing the race card” or “playing the poverty card.”  On the other hand, when there is no logical explanation for an abdication of civic responsibility other than race or poverty, the improper acts must be called out.  In short, if six middle class white people had been killed under the same circumstances in a Saint Joseph hotel, charges would have been brought quickly.

It has taken over a year for the Prosecutor to make this decision.  The Prosecutor’s press release cherry picks the facts to support his decision not to charge.  This hotel is not exempt from the legal requirements applicable to hotels.  In the civil litigation, the owner has admitted the Cosmos Extended Stay Inn was treated as a hotel under Michigan law.  Since 1991, Michigan has put responsibilities on hotel owners, many of which were ignored by this hotel.  None of the witnesses heard any smoke or fire alarms.  Michigan law requires an automatic internal audible alarm system.  An independent company hired by the County to study the cause of the fire concluded “I believe the Fire Alarm System did not go into an alarm state during the fire and did not activate the horn strobes throughout the building.”  Additionally, the fire alarm system was pulled by at least two of the residents, but the system failed to activate.  Witnesses have stated under oath that, prior to the fire, the manager of the hotel had shut down the main fire alarm system.  In making the decision not to charge, the Prosecutor ignored or decided not to believe these facts.

We have all heard the statistics that, in a fire, seconds are important.  The bodies of the six family members were found in the hallway trying to escape.  They were overcome by smoke.

In the civil discovery process, the owner refused to answer some questions as he expected to be charged.  Yes, the family has a civil remedy.  But, that is no excuse for the Prosecutor not to charge criminally.  Drunk drivers are sued and concurrently criminally charged on a regular basis.

Calling out discrimination can be an ugly business.  But, more ugly is the act itself.  The family deserves more.  The people of Berrien County deserve more."