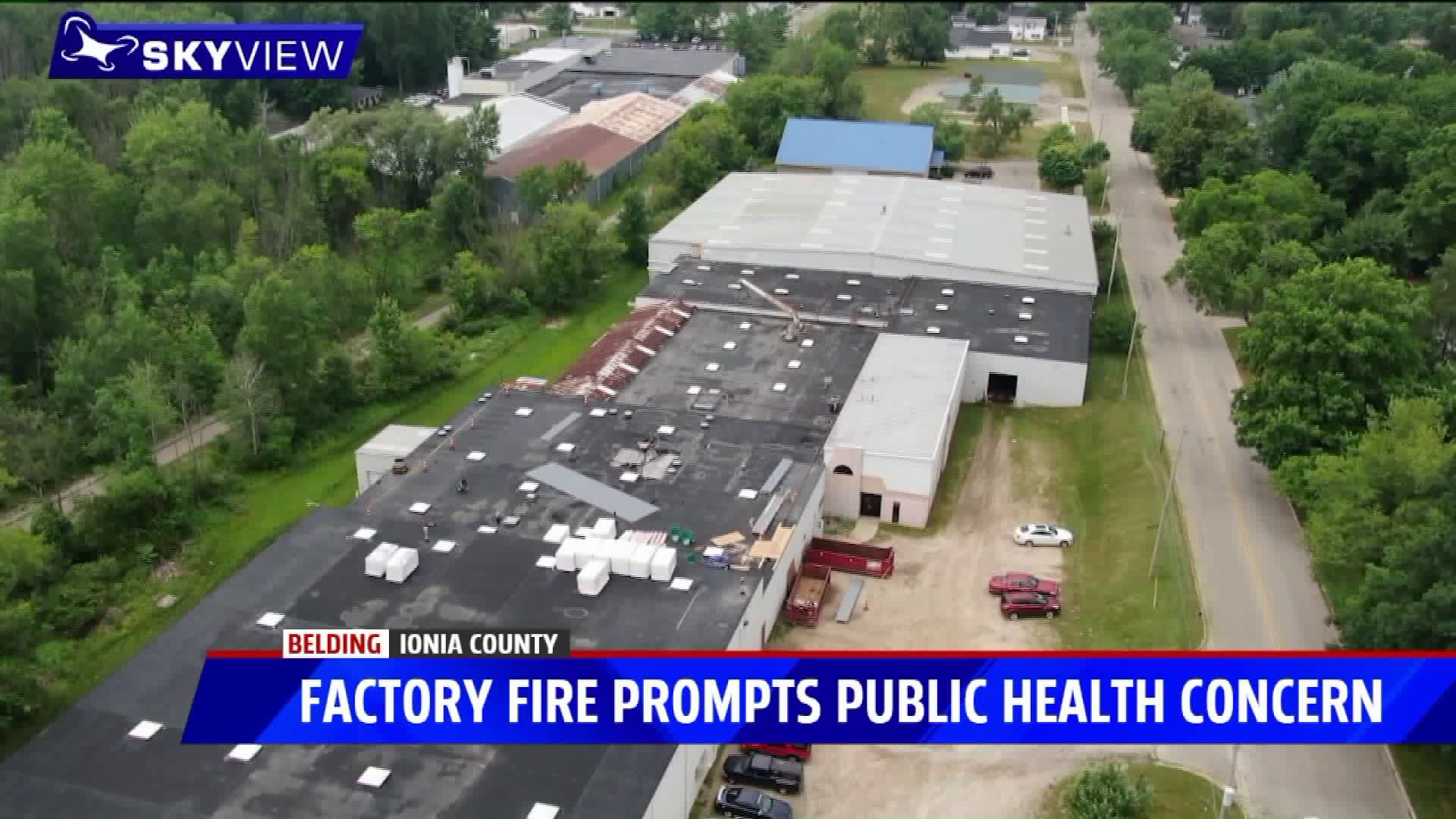 BELDING, Mich.— Belding's city manager is worried that hundreds of lives could be at risk due to toxic gas being released from a nearby manufacturing facility.

When a fire broke out at Kassouni Manufacturing Inc. (KMI) on June 22, City Manager John Niemala met with Belding's fire chief to review the aftermath. They found that conditions were much worse than they previously thought, including the discovery of a hole in the roof that proceeded the fire.

“We made the decision that we had to go beyond our, us to deal with what was going on there," Niemala said.

Niemala sought assistance from Ionia County Emergency Management, which brought in state and federal resources from Michigan Department of Environment, Great Lakes and Energy, the Michigan Occupational Safety and Health Administration, Department of Health and Human Services, and the Environmental Protection Agency.

Officials from these agencies inspected KMI on Friday. Soon after, the Ionia County Health Department issued an imminent danger order. The order addresses the toxic gas that can come from fires at KMI.

Some of the products KMI manufactures at the Belding facility are pool sanitizing tablets. During the process of making those tablets, a chemical called trichloroisocyanuric acid is released in dust form, which accumulates on the facility floor. The white crystalline powder has a strong chlorine-like smell.

When mixed with water, the chemical is extremely flammable. When it burns, it releases a potentially deadly gas.

“That was, I believe, the seventh time we had to respond down there," Niemala says. “You’ve had your chances. Enough is enough. Now things, like you do it the first time, maybe I don’t know, I can’t address who was here when the final decisions were made on that but at the end of the day, from my observations, what we see today, it needed to be done.”

Bob Wheaton, a public information officer with MDHHS said while this was the first time the department was alerted to the concerns at KMI, it is always available to local governments for assistance in public health concerns.

“We think we’ve managed that situation and that worst-case scenario should not occur at this moment," Chris Ethridge said.

Ethridge is a field operations manager in the air quality division of EGLE. He, along with MDHHS toxicologist Joost van 't Erve have been working with their colleagues in other state departments and the EPA to mitigate the risk.

“The main thing is that the facility will remain shut down until all the appropriate management things are in place that we have all identified, so there will be no production of the pool chemicals until that’s done," van 't Erve said.

“The worst-case scenario that the EPA modeled last week would have been if all the trichloroisocyanuric acid that was on site would have been converted into the chlorine gas, which is highly unlikely to happen," Ethridge said. "But that’s the worst case that we have modeled and that would have resulted in sickness and death and injury, but that’s the very worst case.”

Niemala said he's worried not enough is being done to prevent this worst-case scenario.

“The concern is, how relative is the hypothetical modeling they did?” Niemala said. “If that’s going to be an ongoing issue, how do we deal with that? Because I for one, wouldn’t want to have to have that as that sitting out there and every day having my residents worry about whether that, that hypothetical example is gonna happen.”

State and city officials agree KMI has been cooperating to meet the state's standards of operation and storing its chemicals.

Niemala said KMI had a contractor at its facility on Monday to start repairing the roof.

There are other operations at KMI that don't involve trichloroisocyanuric acid, which have been allowed to continue under the state's remediation requirements.

KMI has not yet responded to FOX 17's request for comment.

Further updates will be provided on the Ionia County Health Department's Facebook page. Residents are also encouraged to sign up for smart 911.