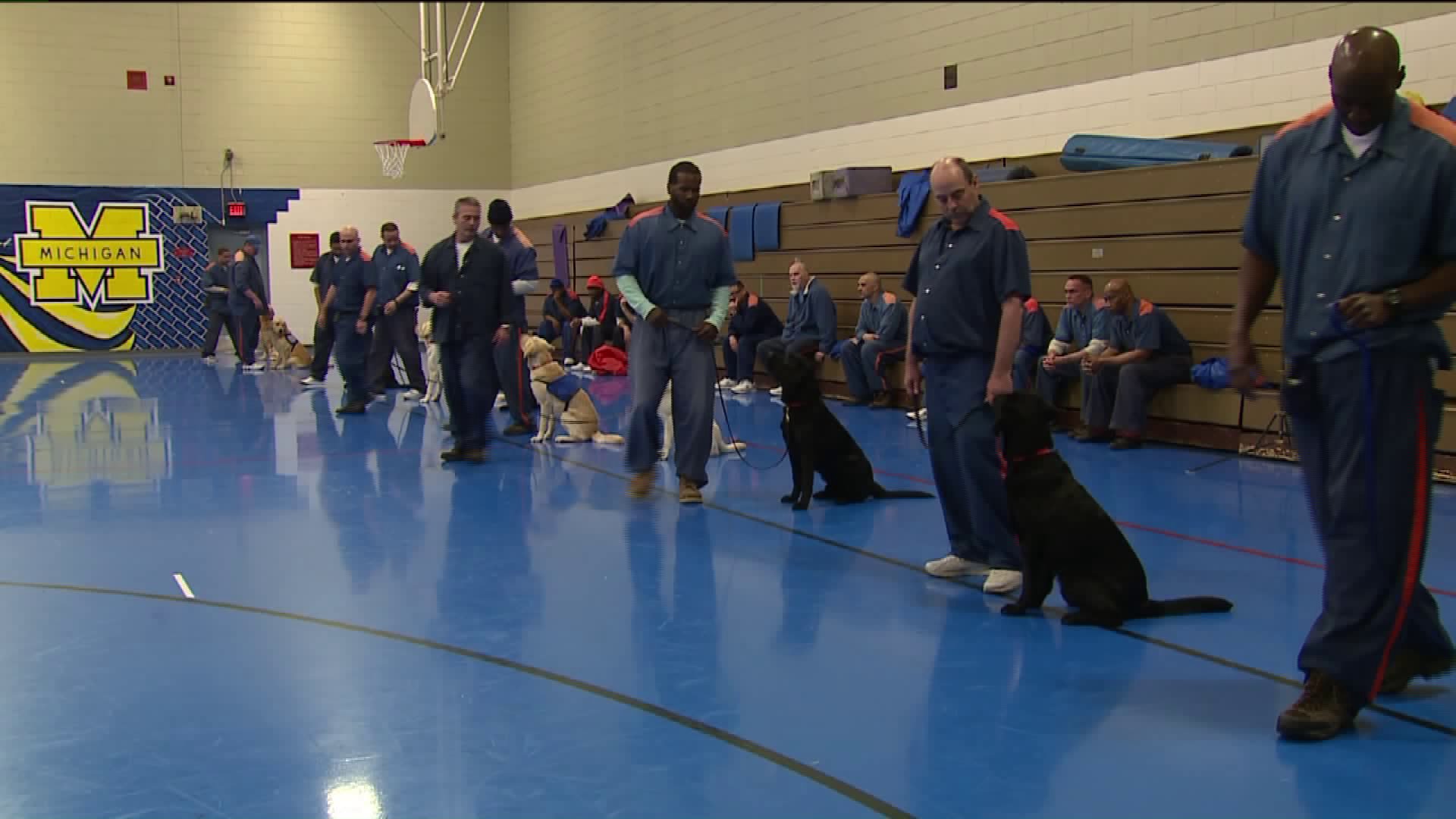 MUSKEGON, Mich. — Inside the Muskegon Correctional Facility, 40 inmates are working to train a new generation of assistance dogs.

Paws with a Cause is a nonprofit in Wayland that raises and trains service dogs, hearing dogs, seizure response dogs and service dogs for children with autism. The dogs are placed across the country with clients at no charge to them. Clients usually wait years to be placed with a dog.

The shortage of dogs is a result of a shortage of volunteers willing to raise the dogs in their first year of training.

Once the dogs are 14 months old, they are sent one of five prisons across the state, where they are trained by inmates for four months.

“I learned more about me than I did the dogs, quite honestly," Wayne Carter, an inmate at Muskegon Correctional Facility said.

About four years ago when the Paws with a Cause partnered with the prison, Carter wrote an essay as part of his application.

“I told them I was a hard worker, eager to learn because it’s something that I’d never done before," Carter says.

Hundreds of inmates applied. Carter was one of 40 inmates selected for Paws Prison Partners.

To be accepted into the program, the men must have had a clean prison record for at least six years prior. The prison is strict with keeping its records clean while in the program, so if an inmate violates a rule, they will have their dog taken away and their spot will go to someone on the waiting list.

Carter is on his 10th dog, Pepper. Every Thursday morning, along with 39 other inmates and 19 other dogs attend class with a Paws with a Cause trainer.

“They take come, sit, down, stay," says Mike Hanna, the prison program manager with Paws. "They take all of that, your basic obedience and they take that to the next level after receiving it from the foster raisers.”

George Williams, an inmate in the program, is on his second dog, Hamlin.

“It’s kind of like having children," Williams says. "You got to keep an eye on them at all times because they’re children, they don’t know any better.”

Each dog is assigned to two men who are bunkmates that share the responsibilities of taking care of the dog.

Hanna says the routine and consistency of a prison makes it the ideal environment for training dogs.

“I think the biggest misconception is that the dogs are at some risk," Hanna says. "You know, the inmates really value the dog and what it brings to their life.”

Like Carter, Demario Jones has been in the Paws program for several years and is on his 10th dog, Skipper. He says the program helps him pay his debt to society.

“All my life I have done a lot of wrong in my community. I created a lot of victims in my community," Jones says. “I have made people look at me in a bad way. Now that I’m mature since I have been incarcerated, it has changed my life."

Jones says the length of time people have to wait to get an assistance dog is not lost on him.

“It also cracks my heart to know that it’s people out there that need animals or also they need people to be there to be a companion," Jones says.

Though the inmates must follow strict rules, it's not all work.

“We play ball once in a while and just let him be a dog," Carter says.

Forming a bond with the dogs is inevitable, which makes it tough when the four months are over and the dog moves on.

“Each dog that I had took a piece of my heart with them, you know," Jones says. "I’ll never forget that.”