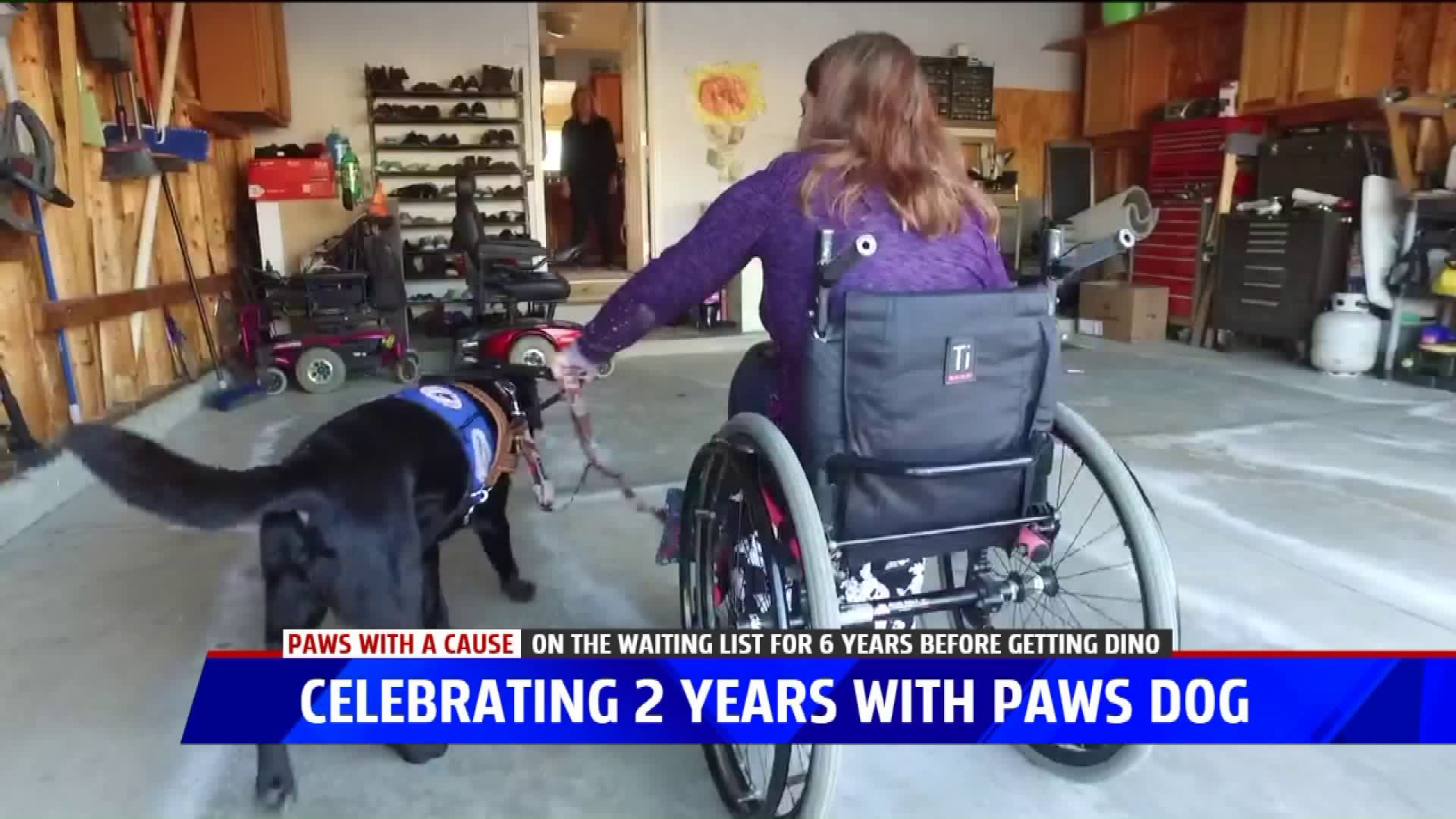 KENTWOOD, Mich. — It took six years for Anna Britton to be placed with her service dog, Dino.

Now, she's living her life in a way she never thought was possible.

Britton has spina bifida and cerebral palsy. She is unable to walk, has trouble getting dressed and her right hand doesn't work. Britton was born with these conditions but didn't get a service dog until about two years ago, when she was 30 years old.

For six years, Britton was on a waiting list for Paws with a Cause, a non-profit in Wayland that raises and trains service dogs. Britton says she started to lose hope, until she was on vacation with her family one day and her dad's phone rang.

He was right. A staff member at Paws with a Cause was calling to tell them that Britton's time had come. She went through mental and physical assessments to make sure that she would be a good fit for a Paws dog. After she passed her assessments, Britton says she made a phone call she'll never forget.

“I just called for an update and they said a group of dogs had come in and she said, ‘One of them we were planning for you,'" Britton says.

That week would prove to be one of the best and most difficult of her life. Within days, Britton experienced a total vein collapse and was hospitalized.

“I just thought, wow you know this would be a really, really good time for a dog," Britton says.

She went from almost losing her life to having her biggest dream come true.

When Dino came home with her, he quickly proved to be life-changing on a night when Britton had one of her muscle spasms.

“It starts out, you know my breathing changes and then as it ramps up," Britton says. "You know other things happen and I noticed that when my breathing changed, he actually started panting, which I found out later was a sign of stress.”

Now, Dino sleeps on top of her to relieve the pain.

“Actually, I’ve been able to get off most of my sleeping meds because he’ll sleep on me and it helps with all the pain at night," Britton says.

In addition to helping her get dressed, picking up items she's dropped and opening doors, Dino's given Britton a sense of independence.

“So freeing that you know, I can go off and be alone and I don’t have to worry," Britton says.

From the moment she met Dino, Britton says she knew she had to thank one person who helped make her dream come true: a fourth grade teacher from Lansing who fostered Dino during his first year of training. Britton called her right away.

People who need a service dog often have to wait years, like Britton did, not because there is a shortage of dogs but because there are not enough people willing to raise them during their first year of training.

FOX 17 is sponsoring Scooter, a black standard poodle for Paws with a Cause. Scooter is halfway through his training and will begin advanced classes at Paws in April.

To get involved with Paws with a Cause, click here.