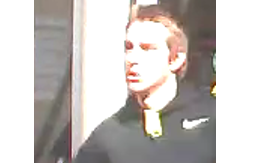 HOLLAND TOWNSHIP, Mich. – The Ottawa County Sheriff is investigating an incident at an area store where a woman says someone tried to take a cell phone picture of her under a bathroom stall.

The incident happened Thursday afternoon at about 3:00 p.m. at the Meijer store on West Shore Drive in Holland Township.

Investigators say the woman was using the restroom when she noticed a cell phone being held under the stall and it appeared to be pointing toward her.  She told store managers and employees found a person who they believed to be the person who was the suspect. When they contacted the man, he ran from the store.

The suspect is described as being a white man, about 5’10” tall, with blonde hair. He is believed to be between 17 and 20 years old. He was wearing blue jeans, brown and white shoes and a black and yellow Nike sweatshirt.

Anyone with information should call Silent Observer at 1-877-88-SILENT.