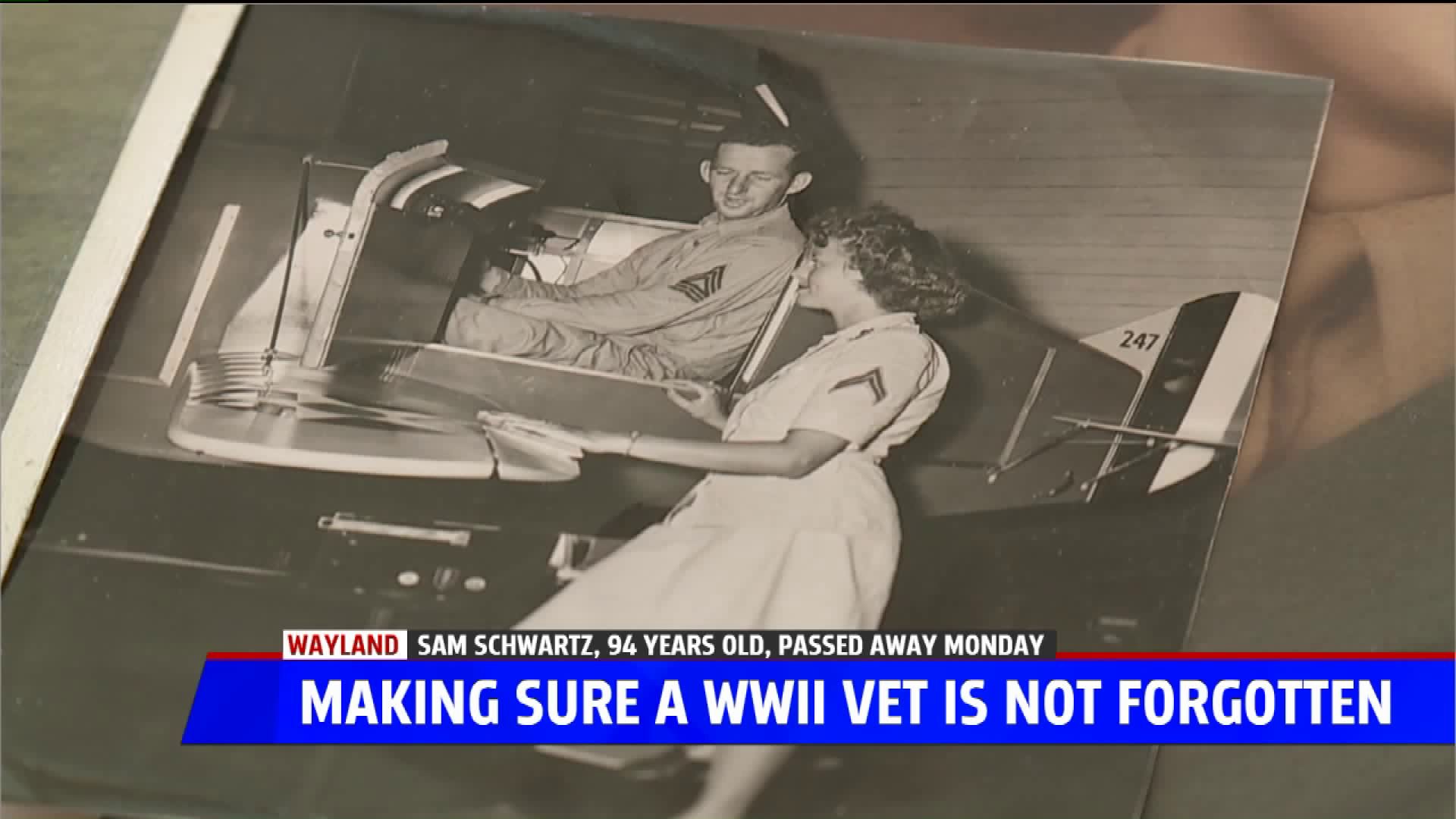 WAYLAND, Mich.--  Since there are no family members who can attend the funeral of World War II veteran Samuel Schwartz his friend is pulling strings to make sure he still gets a proper service.

James Linton, 69, met Samuel Schwartz nine years ago while Linton's wife was working at the nursing home where Schwartz and his wife lived. Linton says they quickly became friends.

The two men didn’t meet until later in life, but the friendship between Linton and Schwartz gave them precious memories they cherished until the end.

“We just had the best time,” Linton says. “We laughed and joked and he was more alert and responsive, even though physically he was withering.”

It wasn’t until after Schwartz passed away on Monday at the age of 94, that Linton was sorting through his belongings and realized the full extent of the life his dear friend had lived.

Schwartz was born in Brooklyn, New York in 1924. Before he had the chance to finish high school, he enlisted in the Marine Corps in December 1942, exactly a year after Pearl Harbor. He trained in Parris Island, South Carolina where he met a woman named Elaine, a fellow marine who he would soon call his wife.

“That generation, they were married for life and very dedicated, that’s the way he was," Linton says.

They shared 60 years of marriage before Elaine passed away in 2009. They both served throughout World War II. She trained pilots in South Carolina while Schwartz was deployed in the South Pacific.

“Not too many WWII veterans left and as Tom Brokaw said, this is possibly our greatest generation,” Linton says. “These boys, I’m sure they didn’t have any idea what they were getting into. They preserved our freedom. I mean, these guys were heroes. All of them.”

After the war, Schwartz and Elaine moved to the Midwest where Schwartz led a successful career in corporate retail. Linton says he looks up to him for many reasons, including his achievements in business, but the strongest connection he felt for Schwartz had nothing to do with wealth.

“He was a father figure to me,” Linton says. “My father was also a World War II veteran but he died when I was very young, so that’s probably one reason I took to Sam.”

Linton is now doing all he can to make sure Schwartz gets a burial fit for the life he lived. He will be buried next to Elaine.

“I’ve been getting in touch with different veterans,” Linton says. “I’ve called a bunch of VFW’s and American Legions, just letting them know that he doesn’t have any family and that I’d like to have a nice turn out because he deserves it.”

In his grief, Linton is thankful he was there to hold Schwartz’s hand when he took his last breath.

“He didn’t pass alone," Linton says. "We got there, thank goodness. Hopefully he won’t pass unknown. That’s what I hope.”

Linton is asking west Michigan veterans and anyone who knew Schwartz to attend his funeral.

The service will be held on Wednesday, April 11 at 1:30 p.m. at Graceland Memorial Park in Grand Rapids with Pastor Michael Keller officiating.