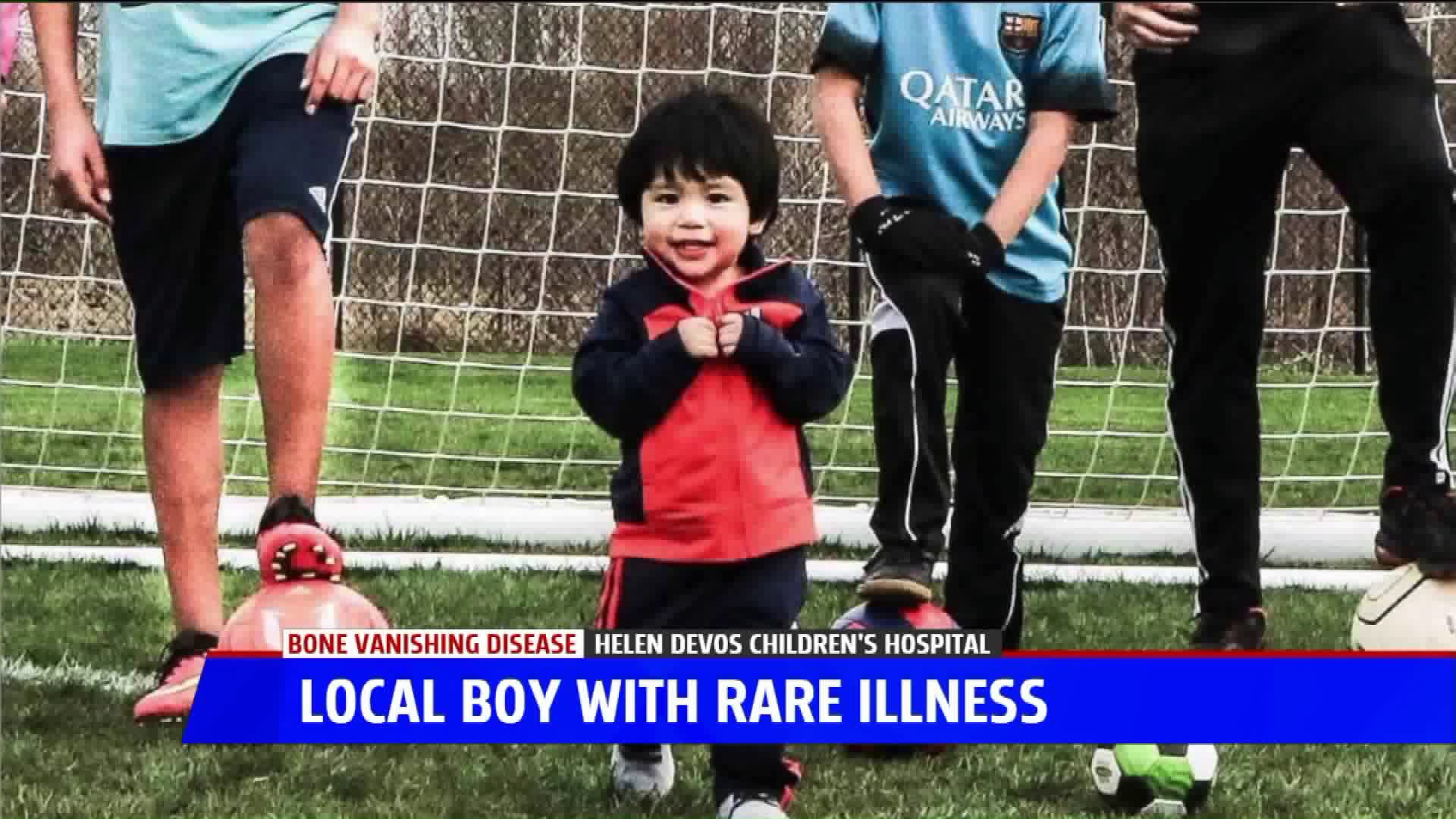 GRAND RAPIDS, Mich. -- An Ottawa County boy is battling a disease so rare, less than 300 cases have been reported in the entire world.

Two-year-old Leo Aguillon went to the doctor for pneumonia a couple weeks ago, but a chest x-ray and CT scan showed the unimaginable: half of the bones in his chest were gone.

"They found that his bones were basically not present," said Leo's dad Antonio Aguillon. "So he’s missing about half of his rib cage on the left side as well as the middle bone, which I think is called the sternum."

"It’s definitely rare," said medical geneticist Dr. Caleb Bupp. "It’s hard to pinpoint a number because it’s had so many names over the years, and it’s been something that we didn’t know what it was, but I think a ball park around 300 is about what’s been reported."

Dr. Bupp, who works with rare diseases at Spectrum Health, says there is a lot of unknowns about the disease, but doctors believe it affects the lymphatic vessels inside the bones.

"What we think happens is that the lymphatics in certain bones sort of get activated and then get overly aggressive and resorb that bone in that particular area,” he says.

Leo has been sedated in the ICU at Helen DeVos Children's Hospital since March 9, not only battling Gorham Stout Disease, but pneumonia and the flu as well.

"It's the hardest thing I've ever seen or been through," Antonio Aguillon said. "We have hope... we are confident that he is going to overcome pneumonia and cope with the disease that he has."

Antonio has been at the hospital nonstop, getting a lot of help from friends and family.  A coworker of his at Grand Rapids Community College started a GoFundMe page to help with the family's medical expenses.

"It's extremely humbling," Antonio said. "I'm impressed and overwhelmed by the generosity of the community; my friends, my coworkers, the GRCC family, which is where I work."

There's no cure for Gorham Stout disease, just treatment for the symptoms. As for what's next for Leo, doctors aren't sure just yet, but his father has hope.

"You don’t really know how resilient you are until you are faced with a situation like this," Antonio said. "I would like to think that we are, we’re optimistic though, we are definitely optimistic and we know Leo is an extremely strong little guy, he’s a fighter."

Doctors in West Michigan have been working with doctors at Boston Children's Hospital, which has a vascular anomalies center and works with people who have Gorham Stout disease. Doctors aren't sure if Leo will make the trip to Boston, just because of his condition right now.

Some treatment options available down the road are medications that rebuild the bones, like stronger versions of those for osteoporosis, or bone grafting surgery.