Watching Nathan Grenell run around the Muskegon Township Fire Department, you'd never know he suffers from Shwachman-Diamond Syndrome, a disease that has no cure and affects his entire body.

"His pancreas, liver, his bone marrow, his kidneys, his lungs... he's pre-leukimic," said Nathan's mom Michelle Grenell. "So every year we get a bone marrow biopsy done to make sure we don't have cancer yet."

That's why Nathan usually has to be pretty isolated.

"A cold to him is a week in the hospital," Michelle said.

That's why when she got the call from the Muskegon Township fire chief to come down for a tour on Sunday, she didn't think they'd stay long.   A handful of firefighters showed up to give the entire family the grand tour.

"We went in the fire truck, we went for a ride around the block, we did the sirens," said Michelle. "They let him use the fire hose to put out a fire in the trees."

Now it's all Nathan can talk about. 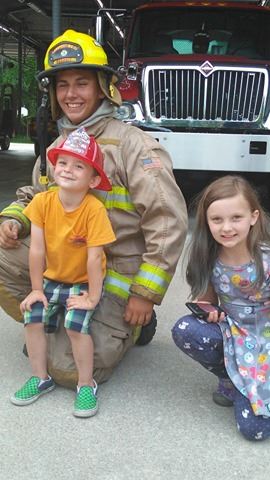 And he did go back Wednesday to show FOX 17 around and meet up with his newest friend.

"Super energetic kid, super warm and loving," said 2nd Lt. Brad Walters with the Muskegon Township Fire Department. "I mean, as soon as you walk up to him, he was chatting with me right away."

When Walters learned more about Nathan's disease, he decided to swab his cheeks to see if he could help other kids like him in need of a marrow transplant.

Those cheek swabs he gave will be sent off to Be the Match. It's completely free and you aren't obligated to donate once you send in a sample.  If you're a potential match, you'll get a phone call and can go from there.