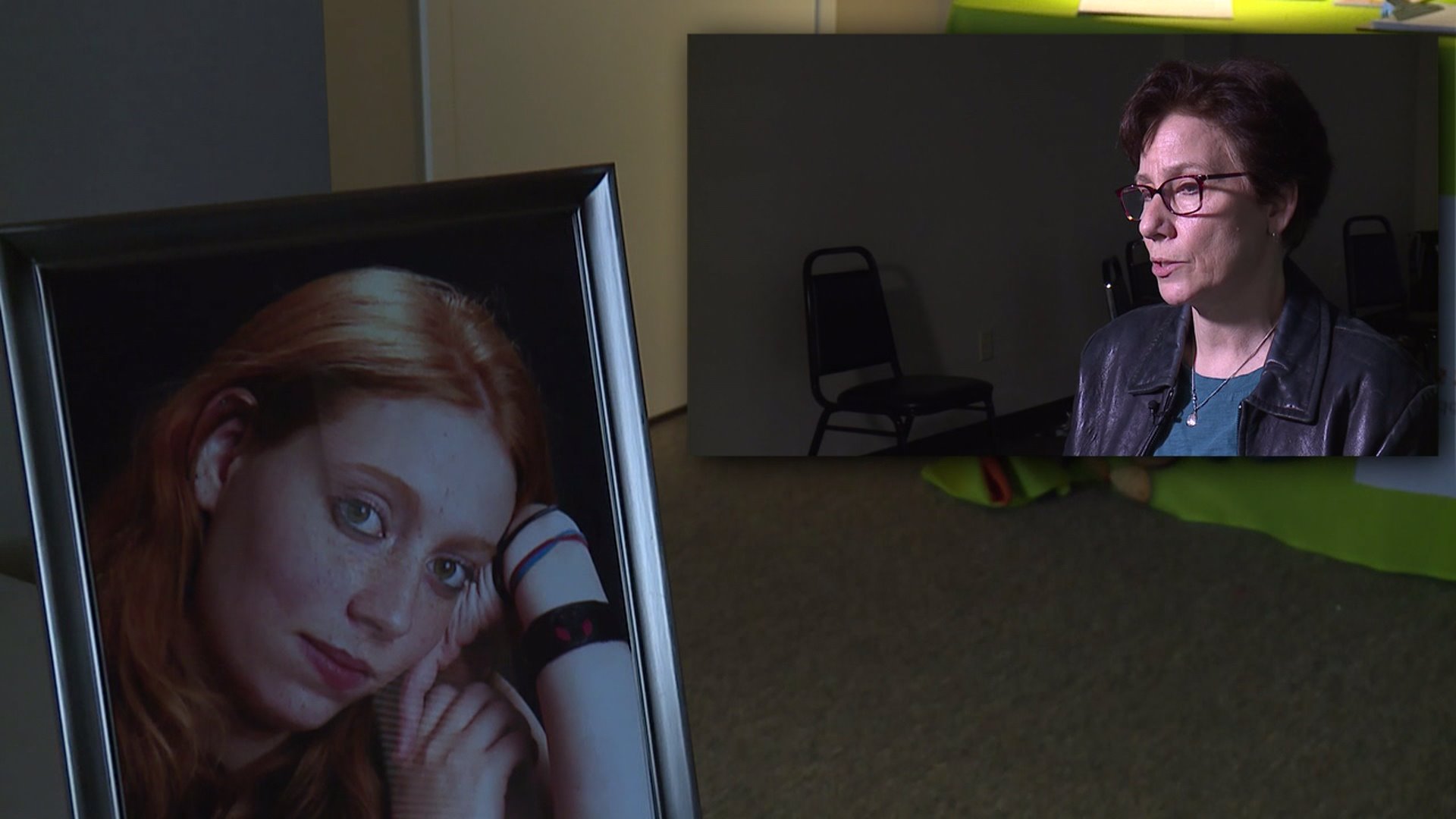 WEST MICHIGAN -- Drug overdose deaths from opioids, including prescription pills and heroin, are the leading cause of injury death nationwide, according to the U.S. Department of Health and Human Services. Opioids are killing more than three out of five people who overdose.

The face of addiction is changing: people of all ages walking a different path into substance use disorder, fueling the disease of addiction. This deadly epidemic can start from anyone's home, doctor's office or community. Lifelong grief and loud calls for real treatment options continue to connect families worldwide to West Michigan.

Nancy King sat in an empty room that was just filled with families affected by addiction, and people facing it head-on, in Kalamazoo. Three years ago she founded the Southwest Michigan chapter of Families Against Narcotics in honor of her daughter Marissa to ensure others do not go through what she and her family did.

"She had great aspirations," King said of her daughter Marissa. "She was an incredible writer and she wanted to become a journalist."

About 80 miles away, Sherri Boster also sat in a recently emptied room at the Ionia County Health Department. About one year after losing her son Denny Bristow to a heroin overdose, Sherri resigned from work and founded the SMART Recovery chapter, as well as support and grieving groups, in Ionia County.

"He was a wonderful person," said Boster. "He had a huge heart, good brother, good son."

Two mothers, miles apart, living with heartbreak unlike any other, yet pain too many families know.

Marissa King was 21. Denny Bristow was 26. Two young faces of the millions lost to prescription pills and heroin, connected through their loved ones' grief and knowledge of the power of the disease called addiction.

"The first thing that crossed my mind when I found out she was using heroin was, ‘I’m a bad mom. My daughter’s a heroin addict,'" said King. "And I had to get rid of that stigma because it was just a coping mechanism. Addiction, it’s a disease, and it’s not a choice."

"Losing a child is nothing that you can ever, ever get over," said Boster. "You can learn how to get through it but the truth is, you’ll get it through it for the rest of your life."

Jeremiah Lindemann created this map in Colorado to honor his brother, J.T. Lindemann.

Lindemann says it's a tool to talk about opioids and how quickly they can become deadly. It's also exposing the dire need for accessible treatment.

The road to addiction

"It really started when she was a child," said King.

King says by high school her daughter Marissa was diagnosed with depression and bipolar disorder. Often well-meaning, she recalled checking Marissa's purse daily when she started to self-medicate, buying pills at school.

"She was kind of getting that attitude that you know, take this drug and feel better because of depression," she said.

Research, often based on under-reported data, shows more than one in four adults living with serious mental health issues also has a substance use problem, according to the U.S. DHHS. For Marissa, prescribed antidepressants began a path to heroin.

"One out of five visits to the doctor's office, you're going to walk away with a pain medication," said King.

But in 2009, the stigma of addiction was a main reason King says she could not find help for her daughter.

"I started calling therapists and I’m getting, ‘Yes we treat substance use disorder, no we don’t take heroin addicts,'" said King, "because at that time their perception of who somebody who used heroin was."

Less than three years later, King got the call she feared in January 2012:

"Even after all these years she knew how to manipulate me," said King. "And she goes, ‘I just need $60 for books.’ Instead of my brain kicking in and going great let me get online and buy those for you, I transferred the money. And she was dead in an hour."

"Those are one of those memories that never go away. They are visceral."

For Denny, the path was as permanent though different.

"As young kids do, in high school partying, having fun, apparently he started taking prescription drugs," said Boster. "I had no clue that they even did that. I did not know for a couple of years actually until he was in full-blown addiction to opiates."

"It was like who are you?" she recalled. "You are a stranger to me, what is going on? I was clueless, I had no idea."

After failing treatments, no local rehab facilities, and going in and out of jail for theft, Denny died from a heroin overdose at 26-years-old at home.

"He passed away and was found by family members on the floor of his bedroom," said Boster.

Fighting the opioid epidemic with treatment

Sharing their stories communities apart, both King and Boster became certified recovery coaches after losing their children to an overdose. King created the Southwest Michigan chapter of Families Against Narcotics, Inc. Boster founded the SMART Recovery chapter in Ionia County, as well as grief and support groups that she and her younger son run.

"It’s my savior," said King. "It’s what gets me through my daughter’s death: being able to know that people don’t have to suffer like I did with lack of knowledge, lack of compassion, understanding, connections."

"And to be able to look at somebody who suffers from addiction and be able to go, there’s no shame in your addiction," she said.

"I do not ever want another parent to have to feel the pain of burying their child," said Boster. "We need more resources, we have nothing in Ionia County for a detox, we have nothing for rehabs."

These mothers know there is still a black holes of viable, local and affordable treatment. The Substance Abuse and Mental Health Services Administration says in 2015 21.7 million people, ages 12 and older, needed substance use treatment at a specialized facility. Yet more than 89 percent who needed help were not treated.

"We have to realize that this is a serious disease, and it's got to be treated as such," said Boster.

Boster and King know the exhaustion, they know this heartbreak. They also know the power of compassion with the right treatment saves lives.

"We have to be able to change that mindset of compassion from the doctors, the community, family members, extended family, so that we can be able to see recovery as a possibility," said King.

If you, or your loved one, need help please reach out. Here are some local resources and people to start: