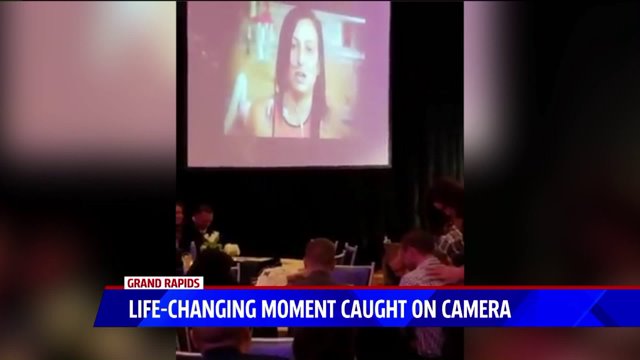 GRAND RAPIDS, Mich. – A moment accidentally captured on camera has been viewed by thousands on social media and is sure to be your feel-good moment of the day.

At the 20th annual Bid for Bachelors and Bachelorettes in Grand Rapids this weekend, a event that raises money for Friends and Families of Cystic Fibrosis, a man suffering from CF got something he’s been waiting for his entire life.

Hillary Mullennix, one of the event’s organizers, was taking a video on her phone of a recorded speech one of her friends, who also suffers from CF, was giving to the crowd. As she rolled, James, who didn’t want us to use his last name, go a phone call from his doctor. A new set of lungs was available, and they were going to him.

“As I’m recording I kind of see this table and all this commotion and some whispers and people are like, ‘he got that phone call,’” said Mullennix. “It was such a miracle and for him to be surrounded by so many people who were there for that same cause. It was breathtaking.”

The video has since been viewed online thousands of times. As of March, James had been one of over 80 Michiganders on a list for transplant. Ironically, James’ mother who is a founder of Friends and Family of Cystic Fibrosis, had told the crowd to silence their phones in her opening address only moments before her son got the most important one of his life.

“She mentioned no one should have their phones out because we want you to enjoy the event, except for her son because he was on the lung transplant list,” said Mullennix, “waiting for that call to change his life.”