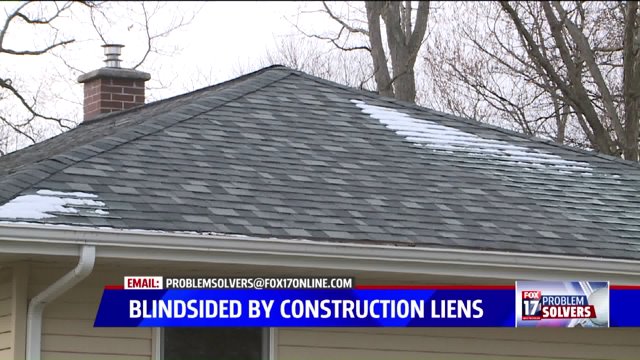 WYOMING, Mich. -- Some homeowners in West Michigan have been blindsided by construction liens because of a local contractor's alleged debt. James Foguth, a contractor profiled by the FOX 17 Problem Solvers, is now accused of failing to pay suppliers and ultimately putting paying property owners in a bind.

The Problem Solvers have heard from many homeowners dissatisfied with True Value Builders in Wyoming. The company has been accused of taking deposits and disappearing or doing shoddy work. We've now learned some customers were satisfied, but little did they know a legal battle bearing their name is brewing.

"Went good as far as I'm concerned. I mean, they did a good job for me," Sandra McCant said.

Her home has a new roof and a new sliding window. She said she paid True Value Builders late last summer after the work was completed. That was about $5,400.

"I didn't have any problems," McCant said.

But the Problem Solvers spotted her name in a lawsuit involving the company and owner James Foguth.

McCant said, "I didn't know anything about that at all."

After two other stories, a viewer tipped us off to a big legal battle. We showed McCant the records.

"That's my address right there," she pointed out.

To her surprise, McCant is one of 17 homeowners listed in the Kent County court filing. In it, James Foguth allegedly failed to pay for materials he installed on several homes.

Square Deal Building Supply' filed the lawsuit and claims Foguth ordered more than $71,000 worth of shingles, siding, and windows using their credit system. When it came time to pay off the debt, Square Deal said Foguth refused.

Now homeowners are caught in the middle. In separate filings with the Register of Deeds, Square Deal filed constructions liens against three of the properties. That means the company now has a financial stake in those homes because of Foguth's alleged debt.

McCant said, "Well, that's kind of scary because if he didn't pay for my supplies, I hope the company isn't expecting me to pay for it when I paid him."

The Problem Solvers sat down with Grandville-based attorney Joel Baar for his insight on construction liens and how they work.

"If the construction lien act is working properly, it's really designed to help residential owners from paying twice for the same improvement," Baar said.

Baar explained, "What it essentially says is, the minute that the owner pays the contractor, that money is not owned by the general contractor. It is held in trust for the benefit of the subcontractors and suppliers."

Baar said this law is used in civil court, but it's also a criminal statute covering fraud.

"We've been able to work with several of the local prosecuting offices in the area counties and working at prosecuting violations of the Michigan Builder's Trust Fund Act," Baar said.

He said contractors cannot discharge the debt in a bankruptcy, and homeowners need to file a statutory affidavit with the court stating they've already paid the contractor. That's if they find themselves facing a third party lien.

McCant may be fortunate as her roof job ended before the required 90 day deadline for Square Deal' to file a lien.

She said, "I'm glad to hear that. But still, I'm sorry that other people, ya know... it's not fair for people to get taken advantage of."

The Problem Solvers reached out to James Foguth for an interview on this and haven't heard back.

Square Deal Building Supply of Grand Rapids, Inc. has been a fixture of the Grand Rapids residential construction industry for 20 years. The family-owned business sells roofing, siding, windows and doors to contractors for residential and light commercial applications.