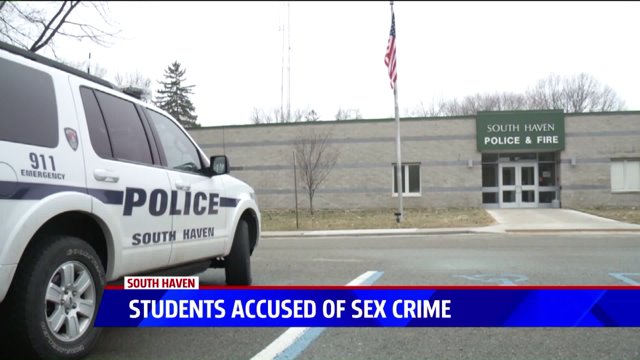 SOUTH HAVEN, Mich. — Five students at South Haven High School have been charged with third degree criminal sexual conduct for alleged sexual acts with a female student at the school, according to the South Haven Police Department.

The department says they learned of the alleged sexual acts last week between six male students and the female student. Police say they interviewed the girl, her parents and each of the male students.

All of the suspects are ages 17 and 18 and are being charged as adults.

Officials have identified the suspects as Damari and Deshaan Palmer who are brothers, Dario Gist, Cameron Watkns and Caskadara Smith.

“A minor age, 13,14,15 legally cannot give consent,” says police chief Natalie Thompson with the South Haven P.D. “The 5 suspects were in the eyes of the law are considered are adults.”

The Van Buren County Prosecutor issued five felony warrants for third-degree criminal sexual conduct which is defined as statutory rape of a victim ages 13, 14, or 15 years of age. The male students have all turned themselves in and have been arraigned and released on $1,000 bond, according to police.

Police say the alleged sexual encounters began last November and say they were alerted to what was going on after a counselor at the school was informed by a student.

“There are some other things that have come to light that have shown that they should have known or did know that she was underage.” Says Detective Kevin Wiley with the South Haven P.D.

Officials say they still need to interview at least one more suspect who could also be charged, and more charges could be on the way in this case.

We would like to inform our school community that last week the South Haven Police Department learned of alleged sexual acts between 6 young men and one minor female who are all students at South Haven High School. SHPD conducted investigations that resulted in the issue of 5 felony warrants for alleged CSC in the 3rd degree.

South Haven Public Schools is concerned for all the students and families involved with this issue. While we will continue to cooperate with SHPD during their investigation and understand the courts will make the final determination on the individuals involved, our main role is to help support our students and families as best we can.