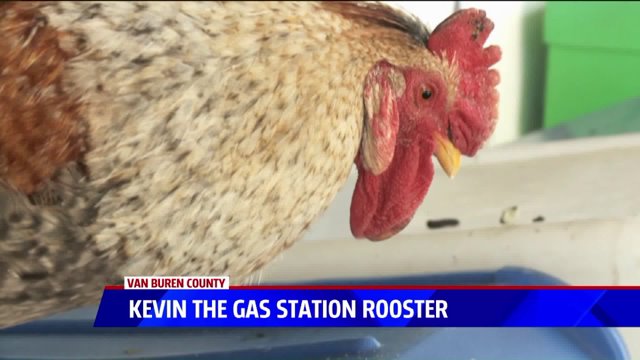 VAN BUREN COUNTY, Mich. — Michelle Brink has been working at Magoo’s gas station for 15 years. She’s seen hundreds of people get gas or have their car washed and then leave. However, one customer hasn't left since he first arrived last fall.

“Everybody in the morning, everybody all day long, they’re like ‘You got a rooster.’” said Brink with a smile. “‘Yup his name’s Kevin.’”

Kevin sits near the door at Magoo's, on M-43 and M-40, perched on top of a newspaper stand. He spends his time staring at customers, looking at his reflection in the mirror, or crowing. But his favorite activity, Brink said, is when people pet him.

"He loves to be petted," said Brink during an interview at the station. "He loves those peanut butter cookies so. He’s become one of us. The owner liked him so he agreed for us to build a box."

Brink said back in October of 2016, he mysteriously appeared at their station. The owner took a picture of him near the the car wash. Brink did the same when she saw him by the woods. Whenever he came, he ate all the deer feed.

“After the deer feed left we thought maybe he would go home [but] he never left,” said Brink. “So we’re like okay, winter’s coming, we better build him a box.”

So they did. They made a little coop for him that resembles a dog’s kennel but with wooden crates around it to keep it insulated. There’s also a bowl of deer feed outside of it which they keep full at all times. He’s lived in it since October and they've been treating him like family.

“I had a customer that dropped off some hay for him because she knew that we were going to keep him,” said Brink. “That’s when we decided that Kevin was going to be ours.”