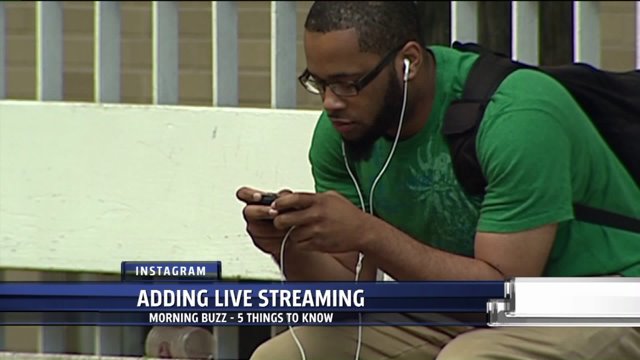 1. Children around the state are hoping to find new homes with loving families for the 14th annual Michigan Adoption Day.

It's become a tradition for many courts in Michigan to hold this special day on the Tuesday before Thanksgiving.

Judges, court staff, social workers, new parents and the latest additions to their homes will be celebrating.

100 children are expected to be adopted.

2. A project is bringing education, healthcare, and affordable housing to the Roosevelt Park Neighborhood in Grand Rapids.

Habitat for Humanity launched the project in 2013 and more details were released about Plaza Roosevelt on Monday.

It includes 5.5 acres located on Grandville Avenue between Graham and Franklin.

Along with the new high school, there will be increased health services through Mercy Health Saint Mary's, and affordable rental housing.

This may be Instagram’s way of keeping up rival app Snapchat, which recently released a line of smart sunglasses.

They tried to buy Snapchat a year later for $3 billion, but Snapchat rejected the offer.

4. Anyone remember the blue dress contradiction of 2015? Now the same situation is happening with a pair of flip flops.

The shoes are causing quite a stir on social media and while the actual color is still unknown, we can say the answer here isn't just "black and white.”

5. You know how you are guaranteed what's on sale at Best Buy for Black Friday? Camp out.

In Plano, Texas a group of four friends set up a tent outside a Best Buy in an effort to beat the crowd expected on Black Friday and score themselves a nice deal.

The guys say they brought plenty of things to do to keep busy.

They have camped out in order to get Black Friday deals for the past three years.