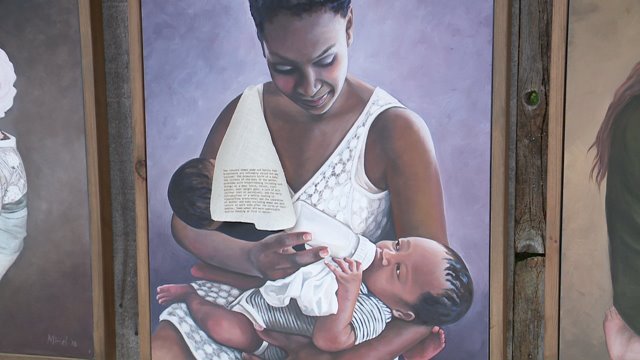 GRAND RAPIDS, Mich. -- To empower mothers to breastfeed in public, artist Miriel Smith entered her third year in ArtPrize to showcase paintings of nursing mothers and provide a shaded nursing and changing station.

Smith's entry is located at Lyon and Monroe in front of Fifth Third Bank downtown. Friday morning she handed out cards to several observers, including a card to thank mothers for nursing in public as well as reminder it is Michigan mothers' legal right to nurse in public: according to the Breastfeeding Anti-Discrimination Act. Michigan is one of 49 states, other than Idaho, which legally protect a mother's right to breastfeed in public.

“I just really wanted to support moms, raise awareness for breastfeeding, and at the same time change attitudes about whether it should be hidden or if it’s okay to be in public and tend to your baby’s needs," said Smith.

Smith's exhibit works to break down breastfeeding stigmas that she recalls feeling anxious about as a mother of two.

“A lot of moms are harassed for feeding their babies," said Smith. "And many moms, they aren’t wanting to flash people, they’re not trying to get attention. When their baby’s hungry and their baby cries, your whole body reacts, it’s biological.”

Yet many mothers continue to be harassed while nursing in public nationwide, which one mother filmed on her cell phone in Connecticut: a man became irate while she fed her infant yards away at a table.

“I don’t find it offensive at all, no," said Michelle Wieringa to FOX 17 Friday at the exhibit.

Another father asking what's the big deal about nursing in public: “[My wife and I] thought it was important to breastfeed, and if the baby needed to be fed, it needed to be fed," said Dale Wychers. "Just like you go to the restaurant, it doesn’t matter.”

Some passersby said they were only concerned with some older children nursing, noting a toddler breastfeeding in a painting.

“This is why women were given breasts, sorry if you don’t want to see it, but it’s life," said Sue Olsen. "I don’t agree with breastfeeding once they’re older. I think there is a time limit and I guess everybody’s entitled to their opinion.”

To showcase a spectrum of issues, Smith painted nursing mothers, who were recently photographed, using a nipple shield and other techniques. One woman painted wore a supplemental nursing system, which can be used to induce lactation or to keep babies with special needs at the breast Smith says.

And as Smith removes one nursing cover from her paintings each day, she says she hopes to empower moms to nurse in public.

See her Facebook page where Smith encourages people to post selfies or 'brelfies' to enter to win a custom painting announced next month.