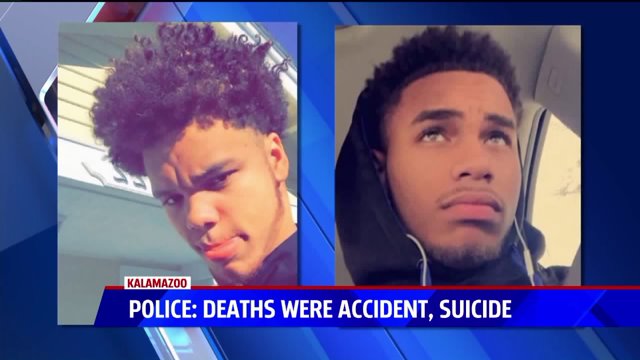 KALAMAZOO, Mich. — Investigators with the Kalamazoo Department of Public Safety say the deaths of two teens overnight were likely an accident and a suicide.

Marsavious Frazier and Daqarion Hunter, both 17, were found dead from gunshot wounds Monday night in 1500 block of Clinton Avenue. Frazier was student at Phoenix High School and Hunter graduated from Loy Norrix High School, according to the Kalamazoo Public Schools.

According to Captain Victor Ledbetter, a witness told them one of the teens was "playing with" a gun when it went off and killed the other teen.  The other person was then distraught and turned the gun on himself.

Police did not identify which teen was shot and which shot himself.

The witness also told police Frazier and Hunter knew each other and there was no argument or altercation prior to the shooting.  Police say the department was in no way involved in the shooting either, despite earlier reports indicating to the contrary.

Nick Luttrell, a junior at Loy Norrix, was friends with both teens, who went by "Savie" and "DQ." Luttrell told FOX 17 on Tuesday the shock hadn't begun to set in yet.

"Savie, he was just like naturally intelligent, he was funny," Luttrell said. "And (DQ) Hunter, he was just a great athlete, he had potential."

Luttrell described his friends as "free spirits," who just liked to make people laugh. He told FOX 17 he hopes the situation serves as a warning to others his age that guns are nothing to play with.

“I think it’s just sad that two lives were taken and it’s just a waste of potential," Luttrell said. "They’re both really smart and if they put themselves to it they could’ve done something really good in life.”

Eddie Anderson III, owner of the 'Fresh-N-Clean' barbershop in Kalamazoo, said he had been cutting Frazier's hair since he was at least 8- or 9-years-old. Anderson described the teen as a "stand-up kid" who wasn't involved in gangs or street violence.

“With situations like this, I always think with their age they still had their whole life ahead of them," he said. “It hurt my feelings to see people saying (on social media), automatically thinking it was gang banging or thug activity. The world is so cruel.”

Ledbetter, in a Tuesday afternoon release, called the incident "very unfortunate" and "we remind people to be mindful and serious about the proper and legal handling of firearms."

Ledbetter said the gun was not stolen, but was also not properly registered.