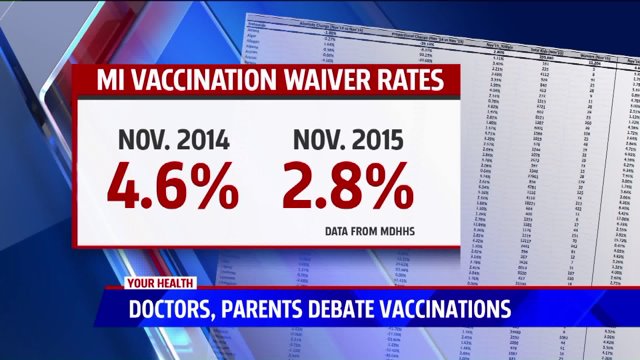 Meanwhile, according to 24/7 Wall Street, Michigan is fourth in the nation for having the lowest DTaP infant vaccination rate at 77.7 percent. Michigan adults ranked seventh lowest for flu vaccination rates at 34.5 percent.

“We have the choice, the final choice, as to what’s going to go inside our kids’ bodies," said Kelly Moeggenborg to FOX 17 Wednesday. "If they take away that right it just seems so wrong, it seems like Nazism to me.”

To Moeggenborg, whether to vaccinate your child must be a parents' right. A mother of four and blogger who originally vaccinated her children, though delaying the vaccine schedule of her youngest, Moeggenborg says she would not vaccinate again unless long-term research showed vaccine safety and effectiveness.

“I don’t want them to figure all this out on my kids," she said, "I just don’t think it’s right, it’s too scary. The vaccine companies aren’t even liable since 1986 they’re not even liable if something happens to our kids and if they get vaccine injured. Who else gets a free pass like that with our kids’ safety? Nobody.”

Michigan is one of 16 states that still allow vaccine waivers for philosophical reasons, in addition to medical and religious exemptions, according to the National Vaccine Information Center.

However, Michigan saw a 1.8 percent drop last year in waivers, reaching a statewide average of 2.8 percent November 2015. A possible reason for the drop is stricter state law enacted January 2015, which requires parents to speak with county health officials before signing waivers.

Despite concerns, including from parents like Moeggenborg who fear vaccine injuries, Dr. McGee says immunizations are not an option.

“Do some children have reactions to the shots?' Dr. McGee asked. "Yes. Can I predict who they are? No I can’t. So we have to look at risk versus benefits, and the risk of your child coming down with whooping cough is much more than them having some sort of reaction to the immunization."

Other parents told FOX 17 they vaccinate their children but are against the flu shot. However, Dr. McGee says influenza is a top cause of hospitalization for children during the winter.

“When my kids were young they got all the immunizations that were required at the time; they probably got extra ones too," he said. "If I’m giving them to my own child you should be giving them to your child.”

In response to the AAP's published policy, the Michigan for Vaccine Choice President Suzanne Waltman released this statement to FOX 17:

“No one should be forced to use a drug against their will, number one.  The supreme court ruled in 2011 that vaccines are "unavoidably unsafe."  Pharmaceutical companies are protected by law and cannot be sued for any harm their products cause, this via the National Vaccine Injury Act passed in 1986.  Vaccines are not 100% safe or effective. They can cause harm.  The Vaccine Injury Compensation Program has paid out over $3 billion dollars in injury claims.  Therefore, religious and philosophical exemptions must remain available to everyone -  daycare, K-12 grades, college & universities, and the workplace.”