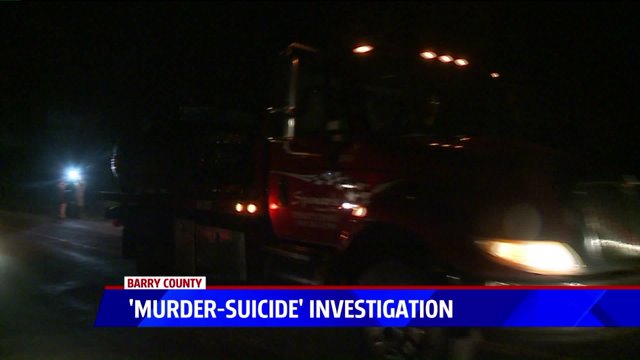 LAKE ODESSA, Mich. — Authorities with the Michigan State Police are investigating what they say appears to be a murder-suicide in Barry County, after they responded to a "domestic disturbance."

Police identified the victims as a married couple and believe Timothy Stanley Hunt, 51, shot and killed Leigh Ann Hunt, 46, in their home. When troopers got to the home, in the 2500 block of E. Vedder Road near Lake Odessa around 3:30 p.m. on Sunday, they say Timothy Hunt then shot himself while seated in his vehicle.

According to county records, Leigh Ann Hunt filed July 6 for divorce, about 14 months into their marriage, and it was not finalized. Records do not show any personal protection orders filed on behalf of Leigh Ann.

Sunday, troopers say when they got to the scene, Timothy hunt was in a vehicle attempting to leave the scene.

The man then shot and killed himself with a shotgun. Officials said there was no exchange of words or gunfire between the man and officers.

Police say the woman contacted police, but her 911 call was dropped due to poor cell service. Investigators said they also had trouble with their radios, adding that information wasn’t coming through clearly on their scanners because of the spotty service in the area.

Police said they've had communication with the couple before but would not elaborate on the nature of those previous interactions.

Autopsies are taking place Monday at Sparrow Hospital in Lansing.