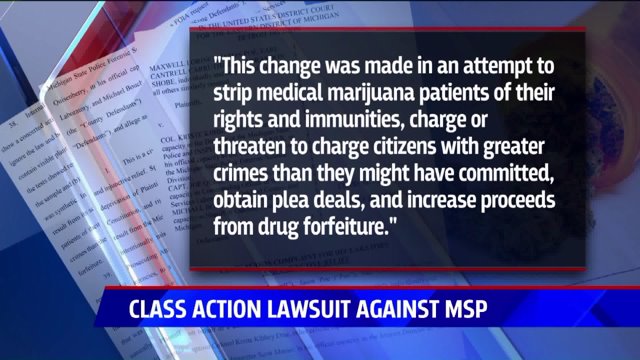 DETROIT — Attorneys filed a federal class action lawsuit against the Michigan State Police crime labs this week, claiming its current marijuana reporting policy violates due process and Fourth Amendment rights and demanding it be thrown out for good.

This suit would have statewide impact, directly affecting the some 180,000 registered medical marijuana patients and anyone caught with marijuana in Michigan.  Attorneys Michael Komorn and Tim Daniels filed the suit Tuesday with the U.S. District Court for the Eastern District of Michigan, Detroit Division.

They write the crime labs, in concert with the Prosecuting Attorneys Association of Michigan and the Oakland County Sheriff's Department,  intentionally misreport marijuana as synthetic, as we saw in the Max Lorincz case in Ottawa County.  A judge threw out his felony drug charge 16 months into the case; meanwhile, Lorincz's 6-year-old son spent 18 months in foster care.  Lorincz is one of the four plaintiffs in the complaint.

But it goes further, writing that the 2013 marijuana policy in the labs was "made in an attempt to strip medical marijuana patients of their rights and immunities, charge or threaten to charge citizens with greater crimes than they might have committed, obtain plea deals and increase proceeds from drug forfeiture."

“The fact that it continues to go on," said Komorn, "it’s an outrage; it’s not science. The Michigan Medical Marijuana [Program] was supposed to be a shield, not a sword."

Read the lawsuit in full here.

Last fall, the MSP Forensic Science Division Director Captain Gregoire Michaud, who quietly retired this May, made a presentation for the Wayne County Criminal Defense Bar.  Michaud had said out of the crime labs' $60 million budget, 40 percent was spent on testing marijuana.   He said this caseload volume impeded their work on investigating other cases, specifically testing rape kits statewide.

Komorn reiterated this suit is working to dismiss this policy in the labs and rearrange the state police's priorities.

“That’s one of the things that I’m hoping comes out of this, is that we turn the focus away from and onto the more, that we would all agree, serious crimes that we need full-on police investigation attention," said Komorn.

The MSP Public Affairs Manager Shanon Banner told FOX 17 Wednesday they will not comment on a pending case, defaulting to their Nov. 2015 statement. The Prosecuting Attorneys Association of Michigan has not responded to FOX 17 for comment.

Later this year, the state police labs are up for their renewal of their international accreditation with the American Society of Crime Laboratory Directors/Laboratory Accreditation Board. It is likely the MSP's crime labs' marijuana misreporting allegations will be challenged during this process.