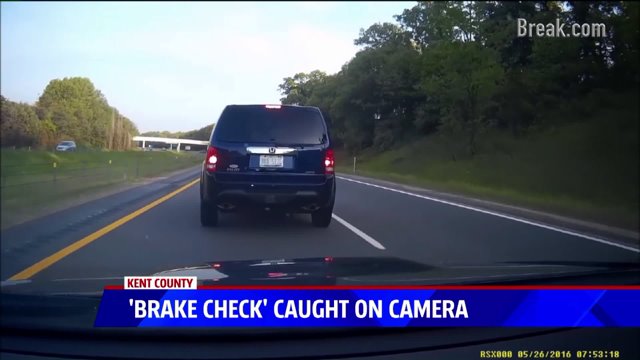 KENT COUNTY, Mich. - A scary 'road rage' crash on the highway was caught on a driver's dash camera after he said he was brake checked.

The crash happened May 26 along westbound I-96 near Dean Lake Avenue.  The driver who crashed, Jarid Smith, told FOX 17 that investigators first believed he was at fault. However, newly released video could point to something bigger.

"I just couldn't believe that has happened, I would have never expected to just lose control like that," Smith said. "I did a 180 so I was facing traffic. I can't believe the guy didn't stop."

Smith remembers the day of the crash like any other, driving his typical morning commute along I-96 with traffic in both lanes before he rolled up on a Honda Pilot. Too close for comfort, the Honda pumped his brakes.

"The first time they got on the brakes I didn't realize they were trying to be aggressive, I just tried to slow down," Smith said. "But the second time definitely was."

After watching the viral video, Lieutenant Chris McIntire with Michigan State Police called the incident a case of road rage.

"That brake checking is what we see in road rage a lot, that's typically the cause of the road rage," said Lt. McIntire.

The video shows Smith swerving right to avoid the last of handful of brake checks before losing control and crashing into the guard rail.  Smith was not ticketed but he was found at fault right after the crash, saying he was unable to load and hand over his dash camera footage until recently.

"We got the information from FOX 17," said Lt. McIntire. "So it helps quite a bit to know who the second driver was. I guess he's a suspect in an investigation. We have the plate, which we obtained from the video, but that could have been somebody else driving."

The footage now allows police to reopen the case, find the driver of the Honda and reevaluate exactly what happened. Smith said the dash camera was well worth the investment.

"In the past I’ve had someone try and completely cut me off, get into my lane… after something like that, it’s a cheap investment," Smith said. "Unfortunately, I had to experience that but I walked out okay."

Nobody was hurt in the crash.   State Police are now re-working the case, telling us the driver of the Honda could be ticketed.