Dangers of ‘thinspiration’ websites – what parents need to know 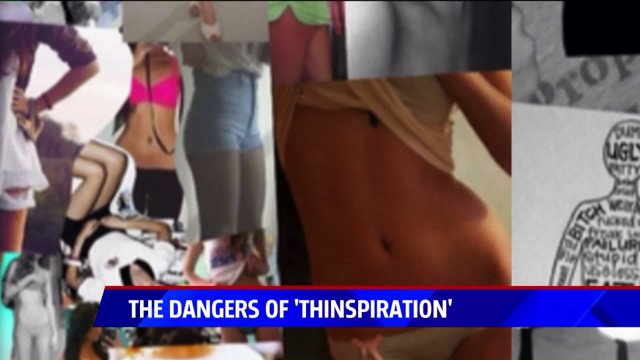 Websites featuring workout tips and weight loss journeys are common, but there are some that are taking the inspiration to be thin too far.

Girls, as young as 10 are sharing tips on how to restrict calories, lose weight and sometimes even purge, on so-called "thinspiration" websites.

"Most of us would look at these pictures and say, 'You don’t look good at all,'" said Sarah Flessner, a specialty dietitian at Spectrum Health.

The web is now filled with pages and pages of protruding rib cages and hip bones. Many of the images are hard to look at, and the comments below are even worse: girls telling other girls that being anorexic and bulimic is the norm.

"Thinspiration is the use of celebrity models and other women that are very thin," said Flessner. "Young girls and women that are looking to lose weight or get fit, use these as inspiration to give them motivation, to restrict calories, exercise more so they can achieve this body image. It also emphasizes an unhealthy body weight, so the majority -- if not all of them in these pictures -- are underweight."

Flessner says when it comes to weight loss, many of the websites are promoting "a real unrealistic body image that can lead to a lot of problems,"

"It promotes a real unrealistic body image, that can lead to a lot of problems," Flessner said.

That's because the web pages are promoting anorexic and bulimic lifestyles. Both are eating disorders that can cause serious heart and digestive problems, sometimes even death.

"Other girls will comment and say, 'You look beautiful, you’re my inspiration. You look great.' So it can be very scary that their distorted perception of what their body looks like," Flessner said. "[Anorexia] has one of the highest mortality rates of any type of psychiatric disorder because of the deterioration of the heart muscle when the body is starving and not getting enough calories. Your body starts breaking down your heart."

Flessner added that it is very common to become dehydrated with bulimia. There is also the possibility of having electrolyte imbalance or stomach rupture after repeated vomiting.

Flessner says thinspiration websites have been around for a several years and have been growing in popularity with social media like Instagram and certain blogs where people can join and have secret discussions in secret groups.

But some of the groups aren't so secret: your child can easily gain access with a simple search and the click of a mouse.

Make sure you know what your child is looking at along with who they're engaging with. But most important, Flessner added, be a good role model to your kids.

"It’s important for parents to model healthy behaviors and a good relationship with their own body image. So, making sure they’re not engaging in any negative body talk about themselves or anybody else they see," she said.

Flessner said there are warning signs that your child might be suffering with an eating disorder: becoming secretive when eating, cutting out whole food groups from their diet, refusing meals, and exercising regularly.

If you have a certain technique for watching what your child does online, reach out to us. We'll air some of your advice on air.