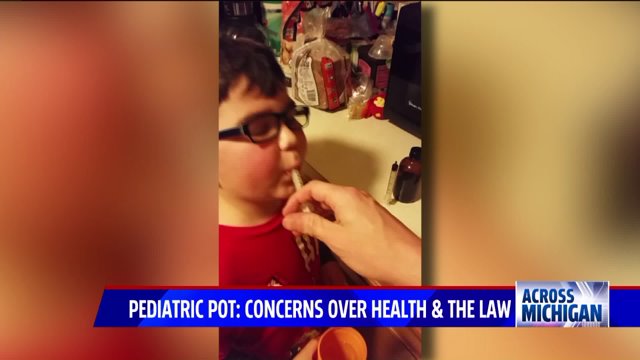 MICHIGAN - Seven-year-old Ryan Powers could smoke marijuana in the comfort of his own home and have full protection under the Michigan Medical Marijuana Act, but, while he doesn't smoke marijuana, he needs a special blend of cannabis oil to keep him out of the hospital.

However, cannabis oil doesn't fall within any provisions under the act. Gray areas in Michigan's Medical Marijuana Act are making it hard for families to get the medicine they need.

Ryan's parents, Jim and Erin Powers, told FOX 17 they're living day-to-day avoiding prosecution and the possibility of having their child taken away because of this.

"That means the state is pigeon holing me into a corner where I have to grow pot for my son," said Jim Powers.

There are nearly 200 registered pediatric medical marijuana patients in the state of Michigan, and Ryan Powers is one of them. Powers is living with an illness called nephrotic syndrome, which causes his immune system to attack his kidneys. The only thing that seems to work is a special blend of cannabis oil.

Ryan's unique situation has gathered support from physicians like Dr. Christian Bogner, who is at the forefront in the U.S. on research in autism. Dr. Bogner said he strongly advocates the use of medical marijuana for a number of illnesses, including nephrotic syndrome.

"I would not care if they would take my license away because of this, because I'm speaking the truth, and I'm sick and tired of being in the closet about this," said Dr. Bogner.

Dr. Bogner has also been studying the side effects of pharmaceutical drugs in comparison to medicinal marijuana. He says the pharmaceutical industry is deceitful and dishonest.

"Cannabis is a Schedule I medication because of its psychoactive effects of THC," said Dr. Bogner. A Schedule I drug is considered having a high potential for abuse.

"And then see that the government actually approved a medication that was synthesized just like THC and works on the same receptor, and schedule that as Schedule III? That shows you how fraudulent that really is." A Schedule III drug has low potential for developing a dependence.

Before turning to medical cannabis oil, Ryan was in the hospital on a weekly basis, undergoing chemotherapy, heavy doses of steroids, and organ transplant medications to keep his body from attacking itself.

The side effects from his medication paired with nephrotic syndrome left Ryan Powers a very sick kid.

Dr. Bogner says cannabis oil is a non-toxic medication that's safe, even for a 7-year-old boy.

"The cannabis is basically telling the immune system, Don't do that," Dr. Bogner explained.

With nothing left to lose, Jim and Erin Powers turned to cannabis oil for their child.

"Immediately after starting the cannabis oil, Ryan went into his longest remission ever, which was over 200 days," said Powers, "so it’s not a fluke. This is the real deal."

Today, Ryan has been in long-term remission for nearly a year. He is able to attend school and live a normal life.

Another advocate for the Powers family is Michael Komorn, president of the Michigan Medical Marijuana Association. Komorn has offered to defend any parent or caregiver who gets in trouble as a result of medical marijuana.

"I really wish the anti-medical marijuana people who call Jim Powers and Ryan criminals would just spend a little time with them, just really understand," said Komorn. "To have to walk in a patients' shoes and go through the process of traditional treatments of chronic pain; go through chemotherapy. Those are things you don’t wish on your enemies."

The Powers started the non-profit Michigan Parents for Compassion, which seeks to support the nearly 200 registered pediatric marijuana patients in the state of Michigan.

Powers said the lack of reform has forced many families to move out of state to seek treatment. For now, the Powers family has chosen to stay in the hope that meaningful reform will come.

They say Ryan's health is worth fighting for.

"It’s so insane, because the ruling says that Ryan is allowed and protected to smoke marijuana, and one of the things I challenge people advocating this ruling is what the voters of Michigan wanted when they voted for the Michigan Medical Marijuana Act. Did they anticipate my 7-year-old son smoking marijuana? And I know the answer to be 'No.'