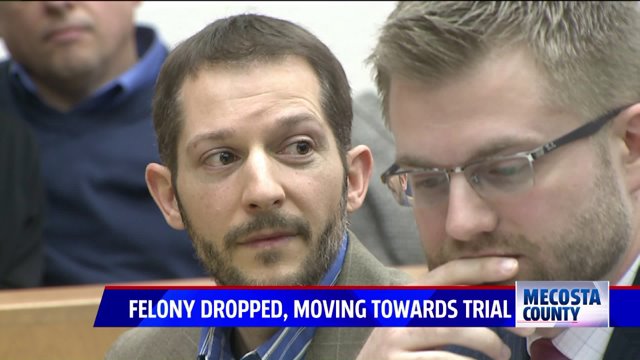 MECOSTA COUNTY, Mich. – A felony charge for obstruction of justice was dropped Wednesday against a Mecosta man who passed out 'jury rights' pamphlets outside the Mecosta County Courthouse in November.

However, a pretrial will be set to continue with his misdemeanor charge for jury tampering.

Keith Wood, 39, faced the five-year felony for obstruction of justice, as well as the one-year misdemeanor charge of jury tampering after passing out about 50 jury rights pamphlets on the sidewalk in front of the Mecosta County courthouse.

Wood’s Attorney David Kallman was shocked at the charges he called “outrageous” and an attack on free speech. Wood’s story caused an uproar nationwide after he was arrested last Nov. 24, using his credit card to post bond set at $150,000.

"This is a free speech case absolutely because you heard the judge at the end say, ‘I’m taking that under advisement, I’m not ruling,’ because she wants to hear facts," said Kallman.

"Absolutely we’ll be pursuing the free speech arguments and everything you heard; there’s no illegal activity here."

As FOX 17 has reported, the Fully Informed Jury Association authored the pamphlets, which write it is a juror's right to vote their conscience. Also known as 'jury nullification', it's a controversial subject some believe is a juror's right according to jury instructions, while others believe it's unconstitutional.

Kallman made the point in court Wednesday that no Michigan statute criminalizes jury nullification, as he argued Wood incited nothing illegal by passing out these political speech pamphlets.

“We’ve heard from everybody from the ACLU to the Cato Institute, the Heritage Foundation, to you name it," said Kallman.

“Really, it’s across the board everybody sees this, that this should not be happening.”

“With regard to the obstruction of justice, we do believe it’s a broader activity that’s being involved here, where you do pollute the entire jury panel," said Thiede in court.

"And certainly, if we were to allow Mr. Wood’s conduct here, we could have every trial stopped.”

After dropping the felony, Judge Booher said the misdemeanor charge stands and defined a juror as anyone summoned for jury duty: "someone who is in the jury pool, or who has been selected to become a juror."

The court intends to refund Wood's $15,000 bond deposit in full, which is a rarity.

Wood told FOX 17 he has no intention of pleading guilty to jury tampering.

Stay with FOX 17 for pretrial coverage and further developments.