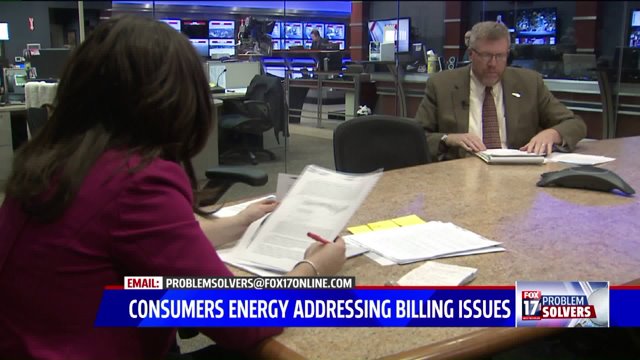 GRAND RAPIDS, Mich. -- Consumers Energy is working at a fever pitch to address numerous complaints over big bills connected to estimated usage readings. The utility is installing smart meters, which eliminate the need for estimated bills.

“Our goal is to get them read between now and the end of April,” said Roger Morgenstern of Consumer’s Energy. "So, while we appreciate the report we put together for the commission, we are not waiting to act. We are acting now."

A FOX 17 Problem Solvers Investigation helped lead to a probe from the state into the sky-rocketing bills from Consumers Energy. Consumers filed a 66-page report in early February after an internal investigation.

Now the state is reviewing Consumers Energy’s findings to see if a real fix is in the works. The state said it will release a review in mid-May.

So for now, it’s a waiting game. One thing to keep in mind is that despite whatever recommendations the state makes, Consumers can take it or leave it unless a commissioner tells them they need to make changes. There is no deadline on when or if that will even happen.

FOX 17 Problem Solvers started to look into the problem back in September when three neighbors, Dana Berry, Jeff Boone, and Christina Mccaid, were slapped with bills as high as $5,000 for electricity in their mobile homes. Those bills were 13 times higher than their normal bills.

It wasn’t long before Problem Solvers received many more emails, Facebook messages, and voicemails from other Consumers Energy customers who experienced the same problem.

“FOX 17 drew our attention to it,” said Judy Palnau of the Michigan Public Service Commission.

FOX 17 went back to Consumers Energy with a stack of complaints and comments from serious viewers. At that time, Consumers told FOX 17 News that only 26,000 people were affected by estimated reads. They assured us there was no staffing problem or discipline issue with meter readers. At the time, they told us there was no limit to how long they could estimate someone’s bill.

Consumers said the reason for most of the estimated bills was accessibility, weather, and the presence of dogs near meters.

A few months later, the state launched an investigation into Consumers' estimated bill practices. The report from Consumers said 170,000 people were getting their bills estimated per month, far more than what they told FOX 17 Problem Solvers. The report indicated that the utility is trying to reduce aestimated reads as much as possible.

“What we are really trying to do is virtually eliminate the estimations,” said Morgenstern. "If we do estimated, we don’t estimate for long periods of time."

The report showed that Consumers meter readers have a 60 percent turnover rate. Consumers said they didn’t have has many meter readers for homes year round as they originally thought they did.

“The meter reader job is an entry level position, so that's the ebb and flow of any business when you have employees coming in and leaving and getting promoted,” said Morgenstern.

Consumers told us months ago of an effort to get an actual meter reading for every home, but last week they said there were certain codes that keep them from making an actual read every month.

Consumers Energy's big message is they are already working on the readings problem before the commission has to ask them.

“As for the overall customer trust, we know we have fallen down, and we need to earn that trust, because we think, with these policies in place, we are going to make it right,” said Morgenstern. "We are going to show our customers we mean business and make this right. We will earn back any respect we may have lost."

Consumers Energy has moved up the installation of the rest of the smart meters by a year. They have about a million left to install by the end of 2017.

Meanwhile, Consumers will begin making actual reads more regularly. Consumers is also letting anyone with a high estimated bill to pay back the balance owed over the same amount of time their meter went without an actual read.