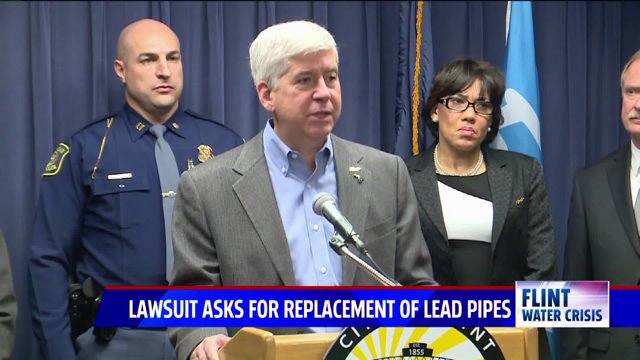 FLINT, Mich. (AP/WXMI) — Michigan Gov. Rick Snyder has named a group of medical and field experts to a committee that will determine long-term solutions to fix Flint's water system and help residents who have been exposed to lead.

But so far, no plans have been announced to replace Flint's lead-corroded water pipes.

"It's a lot of work to take out pipes, to redo all of the infrastructure," Snyder said Wednesday. "The short term issue is re-coating the pipes and that would be based on third party experts saying the water is safe."

Replacement costs have been estimated to be as high as $1.5 billion, according to Flint's mayor.

Snyder said there are lead pipes in many systems across the state and country that are safe to drink from, but also added that "everyone understands we’d like to see those pipes replaced."

A new lawsuit filed by the ACLU on Wednesday asks a federal judge to force Michigan and the city of Flint to replace all lead pipes in Flint's water system to ensure residents have a safe drinking supply.

The complaint says service lines from water mains into homes should be replaced at no cost to customers. The suit seeks an order requiring city and state officials to remedy alleged violations of the federal Safe Drinking Water Act.

It's at least the fourth lawsuit filed over Flint's lead-tainted water. The others seek financial damages and class-action status.

During a press conference Wednesday, the governor said the 17-member committee will make recommendations regarding the health of people exposed to lead, study Flint's water infrastructure and determine potential upgrades, and establish ways to improve communication between local and state government.

“We hope to help Flint not only recover from this water crisis, but also to improve the city’s quality of life for generations to come. It’s a proud, resilient city, and we are going to work with people in this city and across state government to make it stronger.”

The committee includes Flint Mayor Karen Weaver, Virginia Tech professor Marc Edwards, who has extensively studied the issue in Flint and elsewhere, and Dr. Mona Hanna-Attisha, who is credited with bringing the problem to the public's attention after state agencies initially dismissed her concerns.

On Wednesday, Snyder also announced Flint-native Rich Baird, one of his top advisers, will lead a team with an office based in the city.

“This is just the beginning, this is not the end  of the process at all," Snyder told reporters. "Let's bring all resources to the table in a coordinated fashion and that will be one of our primary instruments to move forward taking more action to  help the citizens of Flint."

The state will continue to pursue the federal government to allow expanded Medicaid eligibility for all residents in the impacted areas up to 21 years old, regardless of income level. Officials also want to continue lead-abatement programs to help minimize and and  prevent long-term health problems associated with lead exposure, and provide additional medical treatment for children.

Weaver said Wednesday that Marc Edwards will oversee all water testing done by the state and federal governments. She added he will be "fully independent," report to her and get paid through private donations in a move echoed by State Department of Environmental Quality Interim Director Keith Creagh.

Flint's mayor also touched on residents' water bills as many continue to refuse paying for the tainted water.

Supplemental funding approved by the state House last week included $3 million to help residents pay their bills. A Senate committee, with minor changes, unanimously approved the aid package to send for a full vote in the Senate.

Nearly $4 million that had been earmarked for bottled water purchases will instead be allocated for health assessments of young children and nutrition programs under revisions passed Wednesday.

A final vote in both chambers could happen as early as Thursday.

“Flint residents should not have to pay for water they did not and are not using," Weaver said. “I want everybody to know I appreciate the federal government stepping up, but this does not replace the state stepping up and giving the funds to our residents to  fix this issue.”

An additional $5 million has also been secured from the Obama administration following a Jan. 16 federal emergency declaration.

Currently, the state is working with the U.S. Environmental Protection Agency to develop a new sampling protocol, adding it's too soon to give the "all clear" on water in the city.

However, officials said water samples were "trending better," but stopped short of giving the go-ahead to residents to resume drinking unfiltered water.

Residents have been using bottled water and filters because the improperly treated supply was tainted with lead from pipes leading to old homes.

Creagh stressed Wednesday that the test results are not statistically valid because there's no guarantee homeowner-provided samples are coming from homes at higher risk. Further testing continues.

Creagh says officials are studying whether the city's pipes are being recoated with enough of a lining of phosphates to keep the lead from leaching.

The state is working to identify newer neighborhoods with no lead pipes, so those residents can potentially get the all-clear on their water sooner.

Here's who else will serve on the committee:

One additional member will be named at a later date.

The following members will also serve on the Coordinating Committee: