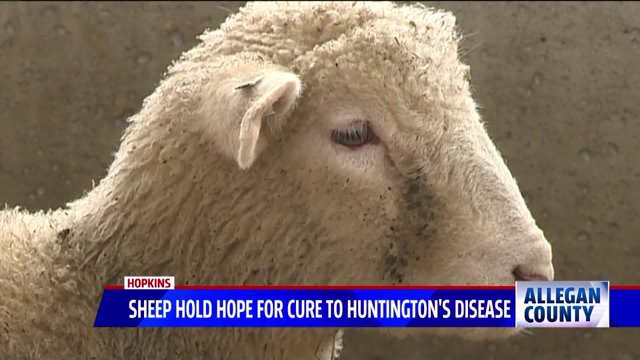 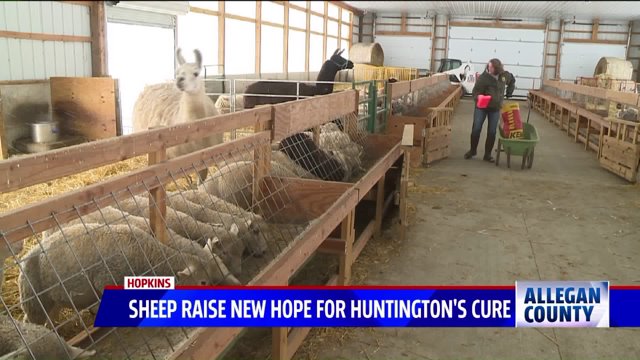 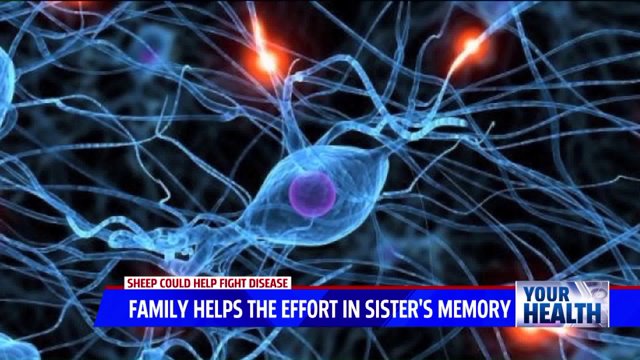 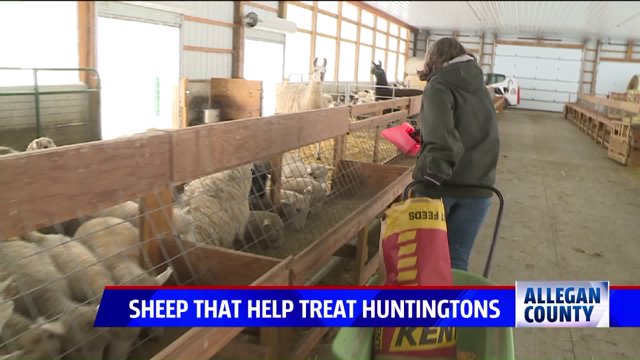 HOPKINS, Mich.— A family in Hopkins is making it their mission to help out a special research project aimed at finding a cure, or at the very least, a treatment, for Huntington’s  Disease.

Mike and Heather Ludlam are pushing the research forward with an unlikely source: sheep. The Ludlams have raised sheep on their farms since 1993, mostly raising Shetland breeds, but now they are raising a sheep that carries a special trait.

Finding a treatment for Huntington’s disease is a cause close to their heart.  Mike’s older sister, Dory, was adopted. She grew up to be an intelligent, sharp, and personable business woman.  Shortly after she had three children, her once-admirable personality started to change.

“She was a fantastic mom. She got married to a really nice guy and they had a beautiful family. They had three children, but after her children were born she started having some mental issues,” said Heather.

Mike noticed the change in his older sister, and at first thought she might have been on drugs, but when he confronted, Dory she denied she did any such thing. Mike told her she needed to go to the doctor.

“That’s when she found out she had Huntington’s,” said Heather.

Huntington’s disease is a genetic neurological disease that causes the decline in motor skills, thinking, reasoning and many other symptoms. It’s a dominant genetic disease, meaning one of Dory’s parents must have had Huntington’s in order to pass it on to her. Now, Dory’s three children each have a 50% chance of having the disease, which is even more the reason Mike and Heather are looking for a cure, or at the very least a treatment.

Mike and Heather stood by Dory as they watched her motor skills, like eating, walking, and talking, slowly deteriorate. Dory’s family lived with the disease for about 10 years before she passed away. The family took care of her as long as they could until they put her in an assisted living facility that dealt specifically with people that had Huntington’s.  Dory spent her last few years in the facility. Heather and Mike recall feeling helpless throughout the whole process.

“I called all these places asking them about clinical trials where we can do something for his sister [Dory], and there was nothing,” said Heather.

Usually patients have about 10 years to live after they are diagnosed. Dory died at the age of 51, four years ago.

“They become unable to talk, and eventually unable to swallow or eat. Most Hungtington’s patients pass away either from aspirating because they are choking or trying to eat or they just can’t eat anymore, and it becomes a slow starvation process,” said Heather.

The Answer in Sheep?

Last year, Mike saw a small press release online that said a certain breed of sheep may carry a specific trait that could possibly treat Huntington’s disease. They knew it was something they wanted to get involved in, hoping other families won’t have to go through the same thing.

The sheep they are breeding have a rare nervous system disorder that is proving useful in fighting Huntington’s in humans.  They produce too much of a compound called GM1 ganglioside. That compound is being used by a professor at Harvard University to conduct research on mice with Huntington’s disease and showing remarkable results.

“Mice that are affected with Huntington’s disease, they can’t walk around very well. They are having a hard time eating or drinking. They inject the mice with the GM1 ganglioside and within about two weeks, the mice are returning to normal function,” said Heather.

Heather and Mike said the mouse models alone are enough to give them hope.

All mammals have GM1 ganglioside, but these sheep have 40 times the amount, which will prevent them from ever reaching adulthood. The Ludlam’s role in all this is simple. They went to South Dakota where Dr. Larry Holler, the veterinarian who had researched the sheep disease for his Ph.D. project, and got a couple of rams carrying the gene to start their breeding off.

The 25% is the lambs they need for research as they will produce the compound, and then they will send them to South Dakota for more research.

“We will get them back to South Dakota to Larry Holler to work with their research. They will be raised until it’s time for them to be butchered as a normal lamb and their tissues will be sent to make the GM1 ganglioside for the research,” said Heather

The lambs do not suffer during this process. The sheep are not treated any differently. The Ludlams raise them exactly as they would their other breeds.

“As far as sheep farming goes, we raise them like normal sheep. The only difference is when they are lambs at the time I normally ear-tag them and maybe give them some vitamin shots, I also take a blood sample from the lamb, and we send those to a laboratory for genetic test,” said Heather.

The lambs wouldn’t show any signs of the disease until they are five or six months old, the age at which they would be slaughtered for market anyway.

The Ludlams said raising sheep is the easy part of the project. They eventually want to raise enough of these lambs to treat the 30,000 people in North America affected with Huntington’s disease.

“The  equation they have come up with is one affected lamb can treat one Huntington’s patient for a year,” said Heather.

The national sheep flock will have to produce 30,000 of these lambs each year, but the hard part is getting it into a human clinical trial.

Ludlams said this is a very unconventional type of treatment, and it’s not something big pharmaceutical companies are jumping on to help fund the research.

“In January of 2015, so a year ago, they [FDA] did a pre-investigative new drug approval from the FDA that the GM1 ganglioside is an acceptable source to start the trial, the safety trials. It’s the trial we need to do before it can go into human clinical trials,” said Heather.

Potentially, the safety trials could be done in as little as a year, but that’s only if the cash is there.

“The struggle has been, as we all know, federal money for medical research has really decreased.”

If you want to help fund this research and make a contribution to move the research forward into human clinical trials click here.

Further information on the GM1 for HD project can be here.