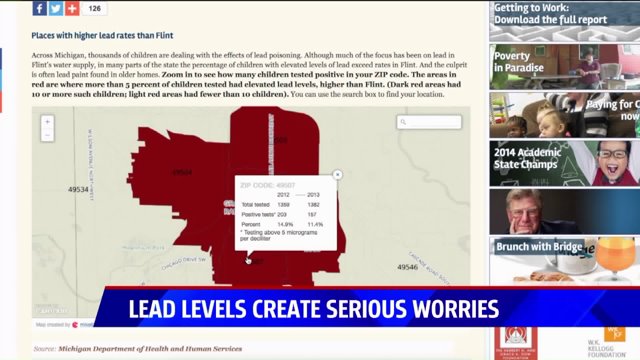 GRAND RAPIDS, Mich. – The recent scandal over lead-poisoning in the water in Flint prompted many of our communities to take a closer look at the issue. According to recent data, West Michigan neighborhoods are home to even higher levels of lead poisoning in kids than Flint.

The problem in Flint was so bad it forced the head of Michigan’s Department of Environmental Quality to quit last week. Yet as this crisis continues, data shows the problem is broader than the Flint area.

In a recent report, The Center for Michigan, a think tank promoting awareness of public policy issues, cited evidence that among five Grand Rapids’ zip codes alone, nearly one in 10 kids tested positive for lead poisoning.

“In Grand Rapids, it’s collectively between those zip codes, it’s 10 percent,” said Paul Haan, executive director with the Healthy Homes Coalition of West Michigan. “We’re four times the national level of kids with that low to moderate to even high level of lead poison.”

“Lead is a colossal problem because the reality is we let the genie out of the bottle, or the lead paint out of the can, for more than a century,” Haan said.

“So we have hundreds of thousands, if not millions of housing units across the state of Michigan that have this lead based paint spread upon them. So how do you put that genie back into the bottle?”

Haan called kids “lead detectors,” urging for landlords and families with children to test their homes for lead first, rather than waiting for a devastating blood test. However, he and other Kent County Health Department leaders recognize the lack of funding and support for families in need.

“Families would like to get their home done, and get the remodeling done in a lead safe way and they look for a program that might cover that, and there’s limited resources in that regard,” said Joan Dyer Zyskowski, program supervisor with the Community Wellness Division for the Childhood Lead Poisoning Prevention Program.

“We had a HUD grant here in the city of Grand Rapids, we don’t have one now."

Like many others, they are calling for government and philanthropic funding to go toward building safe, affordable housing for families with kids.

Specifically, Haan believed a tiered strategy would help eradicate lead poisoning, including: landlords would ensure rental properties are in safe condition; agencies would raise more awareness for parents to affordably protect their children from lead; and then concentrated education and funding to safely fix or replace housing with high lead levels.

“We’ve got to target families with children to make sure those kids are safe because it not only provides a housing unit that’s affordable for that family, but that becomes a platform for so many other things: good health, good performance in school, good employees later on in life,” Haan said.