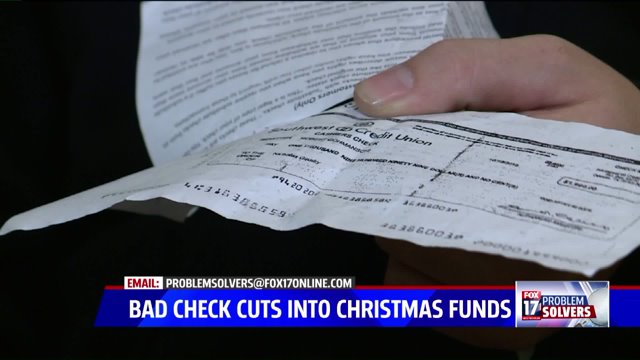 WYOMING, Mich. -- A Wyoming man said he helped out his neighbor by cashing a check for him, but something went terribly wrong.

After the man cashed the neighbor’s check for $2,000, it came back fraudulent, and now he’s on the hook for the money. He reached out to the FOX 17 Problem Solvers.

The 25-year-old Loveless is a father to his 2-year-old son, Logan, and his son is excited for Santa to arrive at their home. However, Loveless doesn’t want his son to know that presents under the tree might not be a reality this year.

“We didn’t even have money for food that day. If it wasn’t for my father I wouldn’t have been able to put diapers on my kid,” Loveless said of the $2,000 he lost.

Loveless told the FOX 17 Problem Solvers that it all started when a friend and neighbor, Nick Geudry, asked him to cash a $2,000 check for him.

“He doesn’t have a bank account, and his girlfriend wasn’t around,” said Loveless.

Loveless agreed. FOX 17 News asked him why he didn’t see a red flag at that moment. Loveless told us that he thought his neighbor was good for the money, because he knew where he lived – right next door. Loveless thought if anything went wrong he could get the money from Geudry.

However, Loveless’ instincts would prove to be wrong.  A couple days after cashing the check, Loveless received a bank alert. It said $2,000 was taken from Loveless’ account. He knew instantaneously what had happened.  The bank had deemed the check fictitious and altered, so the money came out of Loveless’ account instead.

Loveless confronted Geudry about the situation and Geudry promised to pay him back. That was at the end of October.  Loveless tried several more times to get the money from Geudry, but with no luck. Loveless then called the Kent County Sheriff’s Department to file a complaint. The sheriff’s office told us there wasn’t enough evidence for a criminal case.

Geudry claims he got the bad check from a Craigslist transaction. The interesting part is that detectives can’t confirm who made the fraudulent check or where it came from, so there’s nothing to verify Geudry’s claim.

Loveless cashed the check at the Huntington Bank branch in Gaines Township, which doesn’t have any responsibility in the matter.

“So what the manager told me, and she was very nice about it, and she said anytime a check is over $1,000 we hold it, but they didn’t for some reason,” said Loveless.

The check is not only for an unusually large amount of money, but came from out of state as well. FOX 17 News is still waiting for an official statement from the bank.

Meanwhile, Geudry refused to talk to us in person, but did agree to a phone conversation.

He said the money is not an issue.

“I start my tour next week, and I make a thousand dollars a show,” said Geudry. “You know how easy I could pay that back?”

Yet Loveless hasn’t seen a dime. He just wishes his kindness to help out a friend hadn’t come at the expense of his son’s Christmas.

Loveless does have the option to take Geudry to small claims court, but he said that will cost him court fees, which is still more money that he just doesn’t have at the moment.