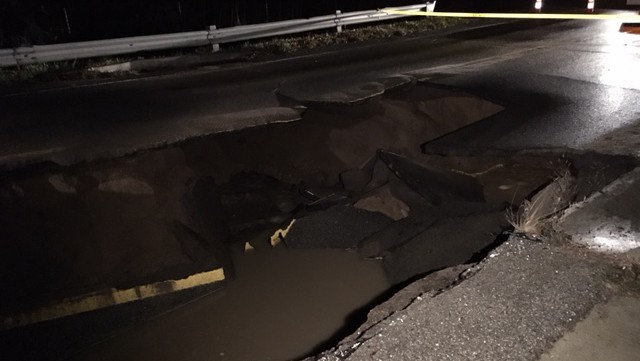 WYOMING, Mich. — A stretch of Kenowa Avenue has been closed to traffic after the road surface collapsed.

The sinkhole occurred Thursday evening on Kenowa north of 56th Street and Barry Street SW. It measured one lane wide and about 15 feet in length. However, the dirt underneath the other lane also was washed out and workers at the scene said that too could collapse.

The road was closed in both directions and traffic was detoured around the area. City of Wyoming crews were on the scene working on the roadway and told FOX 17 the street collapse likely was a caused by a 12-inch water main breaking and washing away dirt beneath the surface.

They said the break was not weather related. They said it will take longer to refill the gravel and reconstruct the roadway itself than to repair the water main.

Workers said the sinkhole poses no danger to any residents living nearby.

Some of the homes along Kenowa Avenue are currently without water service, according to the City of Wyoming.  A temporary repair is being made to the broken water main today and service is expected to be returned on Friday.  If portions of the water main need to be disinfected and tested, water service may stay off for longer.

The road is expected to be closed until a permanent repair is made on Monday.

The city says all residents on Kenowa  have access to their driveways, but through traffic will be detoured.

Affected homeowners can leave their contact information at 530-7260, which is monitored 24-hours a day to receive a return call with information or help.