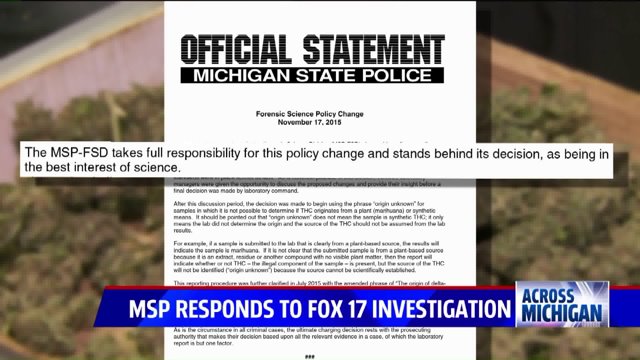 Tuesday MSP-FSD officials responded to FOX 17’s investigation: officials stated they stand by their policy change, but they failed to address some of our biggest questions.

Last month, FOX 17 was the first to show you emails accusing the crime labs of falsely reporting marijuana extracts, leading to trumped up felony charges of synthetic pot possession. Tuesday, state police officials released a seven-paragraph statement which explains their 2013 policy change to write “origin unknown” on lab reports where they said they cannot determine if samples are marijuana or man-made THC (mainly in the case where pot plant material is not present).

However, their statement does not address the concerns FOX 17 revealed in uncovered emails from MSP-FSD’s own crime lab employees who wrote to their peers that they do have the science to prove where pot extracts, like edibles and hash, come from.

Here is the MSP statement in full released to FOX 17 on Nov. 17:

“In 2013, the Michigan State Police Forensic Science Division (MSP-FSD) changed its policy regarding how marihuana and THC are reported in an effort to standardize reporting practices among our laboratories and to ensure laboratory reports only include findings that can be proved scientifically.

With the influx of synthetic drugs into our laboratory system it became necessary to ensure reporting standards were in place across all labs. As is common practice in this division, involved laboratory managers were given the opportunity to discuss the proposed changes and provide their insight before a final decision was made by laboratory command.

After this discussion period, the decision was made to begin using the phrase "origin unknown" for samples in which it is not possible to determine if THC originates from a plant (marihuana) or synthetic means. It should be pointed out that "origin unknown" does not mean the sample is synthetic THC; it only means the lab did not determine the origin and the source of the THC should not be assumed from the lab results.

For example, if a sample is submitted to the lab that is clearly from a plant-based source, the results will indicate the sample is marihuana. If it is not clear that the submitted sample is from a plant-based source because it is an extract, residue or another compound with no visible plant matter, then the report will indicate whether or not THC — the illegal component of the sample — is present, but the source of the THC will not be identified ("origin unknown") because the source cannot be scientifically established.

This reporting procedure was further clarified in July 2015 with the amended phrase of "The origin of delta-1-tetrahydrocannabinol may be from a plant (marihuana) or a synthetic source."

The MSP-FSD takes full responsibility for this policy change and stands behind its decision, as being in the best interest of science. The allegation that politics or other influence played a role in this policy change is wholly untrue.

As is the circumstance in all criminal cases, the ultimate charging decision rests with the prosecuting authority that makes their decision based upon all the relevant evidence in a case, of which the laboratory report is but one factor.”

Note that in the first paragraph, state police officials write that their 2013 marijuana and THC reporting change was made in an effort to “standardize reporting practices among our laboratories and to ensure laboratory reports only include findings that can be proved scientifically.”

Officials explain that the crime lab was testing an influx of synthetic drugs. Then, as FOX 17 has been reporting, after a discussion, MSP officials changed policy to write “origin unknown” on lab reports for samples officials said are impossible for their lab employees to determine where the THC originates.

Yet again, writing “origin unknown” on lab reports is a resonating point of contention, attorney Michael Komorn, medical marijuana activists, and even crime lab scientists themselves disagree. This is even evidenced within months of uncovered email chains between MSP-FSD employees where crime lab scientists and directors wrote they can prove where marijuana extracts come from based on science and tests available in the crime labs.

But MSP’s argument appears to remain that because there is no pot plant visible in samples like hash and edibles, their labs cannot determine if the THC is natural or man-made: again, the difference between a misdemeanor and felony.

Ultimately MSP officials wrote, “MSP-FSD takes full responsibility for this policy change and stands behind its decision, as being in the best interest of science.”

As of Tuesday, MSP officials decline on-camera interviews with FOX 17, including an interview with MSP-FSD Director, Captain Greg Michaud.

Although it is up to the prosecutor to file charges, this crime lab reporting change has severely affected people’s lives, including the father in Spring Lake Max Lorincz who is charged with felony possession of synthetic-THC for having butane hash oil.

Lorincz has lost custody of his son since September 2014 as a result, and he is due back in Ottawa County Court Friday. Lorincz and his family have started a GoFundMe page to raise money to continue fighting their case and comply with court’s orders: including money for transportation to drive to drug tests and counseling all because he is a medical marijuana card-carrying patient.

Stay with FOX 17 for the latest on this investigation.