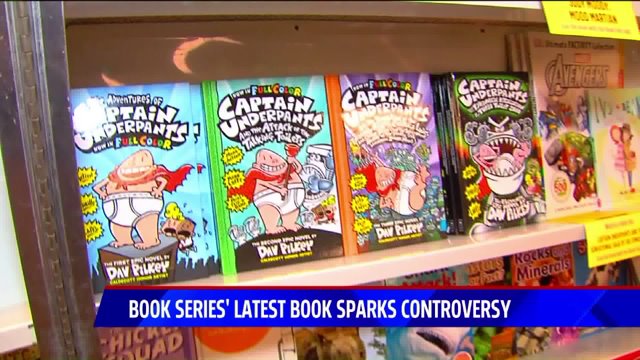 ROCKFORD, Mich. – The newest installment of a popular children’s book series is raising nationwide concerns among parents and educators.

Just last week, Arborwood Elementary School in Monroe, Michigan, pulled the new Captain Underpants book from its Scholastic book fair shelves. The installment, entitled "Captain Underpants and the Sensational Saga of Sir Stinks-a-lot," reveals that Harold, a main character throughout the series, grows up to marry his partner Billy.

The theme has led to uproar in school districts across the country, but Rockford Public Schools Superintendent Dr. Michael Shibler is getting out ahead of the controversy. He and his staff sent out a letter to parents of elementary school students, alerting them to the book’s themes but stopping short of discouraging parents from purchasing it for their children.

“My only goal right now is to be completely transparent with parents,” said Dr. Shibler, “and if in fact they want to purchase this book at a book fair, then they in fact can do so, but they’re going to be informed to this potential controversy.”

The Captain Underpants series includes 14 books and three spin-offs, has sold over 70 million copies worldwide and has been translated into over 20 languages. Even DreamWorks got in on the action and bought the rights for a film adaptation to be made at a later date.

Scholastic, the publisher of the series, lists the book as suitable for kids in grades 2 to 5.

Dr. Shibler isn’t putting politics into his decision but feels the best route to take is to allow parents the option to buy or not buy – simple as that.

“I do know there are some people that would find that inappropriate for their children to read, so let the parent make that decision,” he said. “I’m not trying to pass judgment on anything. I’m just saying, I’m going to inform you as a parent so you make the decision whether you want to buy this book at the book fair for your child.”