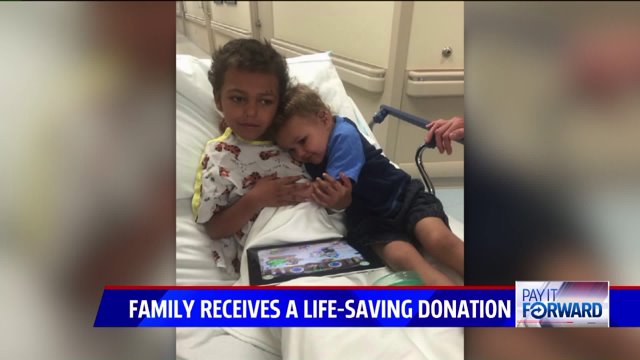 GRAND RAPIDS, Mich. – Today was a day AJ Brann and his wife Jessica weren’t sure they would ever see. After losing their oldest son Taylor in 2012 to a rare kidney disease when he was just 5 years old, two more Brann children were also diagnosed with focal segmental glomerulosclerosis, for which there is no cure. The only hope infant Baxter and 5-year-old Sebastian had for leading a normal life, was to get a new kidney from a willing donor.

For Baxter, the kidney was closer than the family may have guessed. Last week, Baxter received a kidney transplant from dad AJ. “I’m really sore still,” said AJ, “but I mean if given the chance to do it again to help somebody else out, I would do it right now if I could.”

Since Baxter’s transplant, things have only gotten better for the Branns. Wednesday, more exciting news that a donor list had yielded a match for Sebastian as well.

“I’m so over the moon right now,” said AJ, speaking to us outside Helen DeVos Children’s Hospital Thursday as his son underwent the transplant inside. “We’ve been trying to get this to happen for so long. There’s not a level to how happy and excited we are for all of this. There’s nothing that could make this better.”

Sebastian’s transplant was also successful, and now the boys will be essentially free of the illness that had made their lives so difficult before. No more 14 hours dialysis every day; no more restricted diets and long nights.

Aside from a few medications and follow-up visits, all is well.

“I’m thrilled to be able to go home and not have to worry about dialysis, not have to place orders,” said Jessica. “It’s just meds. It’ll be a piece of cake.”

Both Baxter and Sebastian are expected to be released from the hospital in a few days, eventually returning to a much more normal lifestyle.

“All the problems we’ve been having,” said AJ, “fixed within hours of the new kidney.”