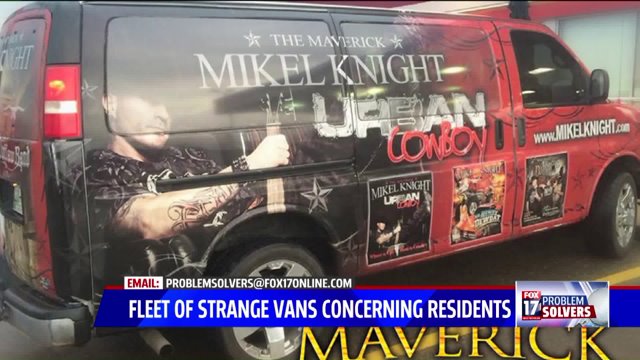 GREENVILLE, Mich. – Residents in Montcalm County are concerned over a suspicious fleet of vans. Decals on the vehicles indicate they belong to the Maverick Dirt Road Street Team, a group that sells CDs and merchandise on behalf of country rap artist Mikel Knight, based out of Nashville, Tennessee.

“I’m very concerned about what exactly is going on,” said Kathy Maguire of Greenville. “The vans look awesome, but just because you have a nice van doesn’t mean you’re a legitimate organization.”

Kathy isn’t alone – and she may be right. According to published reports, similar drivers  in other parts of the country and working as part of the Maverick Dirt Road Street Team have been charged with selling Knight’s merchandise without a license to do so. As for Knight – whose real name is Jason Cross – our research indicates he has an extensive criminal background, including several assault charges dating as far back as 1996.

But what Maguire and many others are perhaps equally as concerned about is the working conditions facing members of the Maverick Team.

“Are they taking out Social Security?" wondered Maguire. "Are they helping these guys with insurance? And are they making sure they have beds to sleep in at night? Are they themselves in trouble?”

FOX 17 News reached out to Montcalm County Sheriff’s officials and Greenville Public Safety but did not get a response.

Online reports indicate Knight has roughly 20 decaled vans and two large tour buses, both of which Greenville and Howard City residents reported seeing over the weekend.