Teenager in wheelchair walks at her graduation 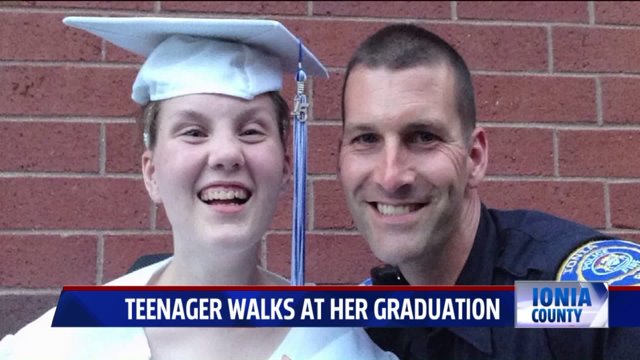 IONIA, Mich. -- A teenager confined to her wheelchair since the age of 16 shocked the crowd at graduation as she stepped out of her wheel chair and walked across the stage with her diploma.

Alicia Anderson was diagnosed with Wilson's disease in 2013, a rare genetic disorder stripping her of a normal life.

"She was a normal, walking, talking 16-year-old, and then life kind of threw us a curve ball," said Alicia's mother, Heather Anderson. "At one point, I didn't think she was going to make it to graduation, let alone make it to 18. Alicia is relearning everything all over again, kind of from being an infant again."

With the help of talk-to-text technology, Alicia can communicate with the world around her, just one of many skills she has been working on at Ionia High School.

"And they've been working with her at school to be able to walk," said Heather Anderson.

Which was a secret unknown to the family until graduation night.

"They pushed her up the ramp and in front of the podium, and as soon as she got to the podium, they locked her chair," said Heather Anderson.

The entire school erupted with cheers as Alicia walked across the stage with her diploma.

"It was the best day of my life," said Alicia.

It will be a memory cherished forever in the hearts of the 2015 class at Ionia High School.

Today, Alicia's parents tell Fox 17, she's working on becoming a little more independent, and her parents are hoping one day she can live on her own in her own apartment. Alicia wants to work at the University of Michigan's Hospital, the same hospital that saved her life.