Changing faces of addiction: Mothers who lost children to overdoses work to help other families 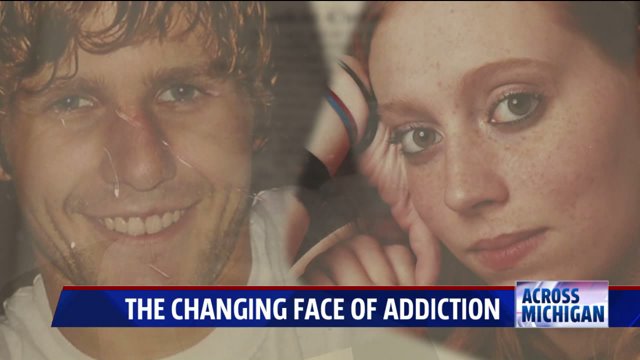 KALAMAZOO, Mich. -- Each day, more than 40 people in the United States die from an overdose of prescription pain killers, according to the Centers for Disease Control.

Meanwhile, deaths related to heroin use over the past decade and a half have quadrupled, as drug overdoses remain the number one cause of injury-related deaths in the U.S.

Nancy King, a Kalamazoo-area mother, didn't know where to turn for help after her daughter became addicted to prescription painkillers during her teen years. It was an abuse the family spent years trying to unsuccessfully fix, she said.

“She would buy drugs at school," King said. "We’re not talking pot, or any of that. It was buying basic Xanax and Ritalin, Klonopin. They’re all very, very accessible.”

The abuse likely stemmed from depression and anxiety her daughter suffered growing up, according to King.

“There’s not a day that goes by that you don’t wonder if they’re going to die." King said.

Then she learned her daughter had transitioned to abusing a much more serious drug: heroin. “She thought she was bigger than the drug ... It’s only a choice the first time.”

Describing her daughter Marissa as being a smart and gifted writer, and, above all, a helper, King says she'll never forget the day she found out her daughter had become a heroin addict.

“I received a Facebook post from a friend who I didn’t know that simply said, 'Your daughter is a heroin addict. If you don’t do something, she’s going to die,’" King told FOX 17.

"That was my wake-up call.”

A failed family intervention and two close calls with death from overdose later, King struggled with where to turn for help and support for both her daughter and her family. She admits the shame and embarrassment from the entire ordeal drove her to avoid talking about the problem.

“I knew nothing about heroin," she recalled. “I wasn’t angry with (Marissa). I didn’t belittle her for her use. But I also didn’t really connect with her on it, and I didn’t really understand.”

“I got a phone call that said, 'Are you sitting down?'" King said. "That was one of those calls that you fear every time, but you don’t ever want to hear it.”

Several medical studies cited by the Centers for Disease Control have found it's common for individuals abusing prescription painkillers to transition to using more accessible and less expensive street drugs, such as heroin. Yet, in 2013, more than half of fatal drug overdoses in the U.S. were caused by prescription drugs.

While King struggled to help her daughter, little did she know that another mother across town was dealing with an eerily similar situation at the time.

Kristi Angelo, a veteran Michigan State Police trooper of more than 20 years, discovered her son was abusing prescription drugs. He, too, began experimenting in his teen years. Angelo, like King, said she didn't know how to help him.

Angelo's son, Nick, spent most of his adult life abusing Norco, Vicodin, and other painkillers, and several times tried getting clean, until it was too late.

“He went home, he went to sleep, and he never woke up," Angelo said. "It was obvious he’d taken the 10 Norco and had therapeutic amounts of Kolonipin, but the combination caused him to stop breathing."

Angelo and King's shared loss has now become a shared mission to help other families struggling with these same issues. The two mothers have now organized a new chapter of Families Against Narcotics in southwestern Michigan. The group is designed to provide support for families who have loved ones who are addicted or have died from overdoses.

“We’ve talked to everyone from physicians to psychiatrists," Angelo told FOX 17. "I’ve talked to teachers; everyone needs to be educated.”

The education is something Steve Alsum, executive director of the Grand Rapids Red Project, works on daily. Alsum said there is a nationwide overdosing epidemic, but too many people are afraid to speak openly about it.

“Substance abuse is something that carries a lot of stigma," he said. "A lot of times, when somebody dies of an overdose, we don’t want to talk about it; we just want to sweep it under the rug. We’re not going to effectively address an issue until we accept that it’s an issue.”

Alsum said the number of fatal drug overdoses in Kent County alone have increased sixfold in the past 15 years, going from just 15 deaths annually to more than 90. Calhoun County is one of eight in Michigan with overdose rates significantly higher than the state's overall average, according to the Michigan Department of Community Health.

“With the number of people dying from this epidemic right now in Kent County, statewide, or nationally, we should see it on the front page of newspapers all the time," Alsum said. "We should be clamoring for a response.”

Even Gov. Rick Snyder acknowledged the issue during his most recent State of the State address in January.

"We have a problem that we need to address, we've worked on it, but not good enough," he said.

"I am making a call now to say let’s develop a comprehensive plan by October where we can do more to prevent drug abuse within our state and help."

“One thing we like to compare it to is an epi-pen," Alsum said. “We’d really like doctors to start prescribing for people who are prescribed opioids to also prescribe Naloxone.”

Alsum said the Red Project provides the Naloxone kits to families and friends of addicts who have reached out to the organization for help, but acknowledges their organization can only do so much.

“The problem is that the overdose issue is so much more widespread than just the people our small non-profit is able to reach in the Grand Rapids area," he said. "It’s a community health issue and we need a community response.”

In the wake of their losses, King and Angelo both say the community response must start with them, with a message to other that drug abuse can hit anyone in any community.

"It's who you thought of as a heroin attack: the junkie in the alley; But it’s not that, it’s our young people," King said.

“We need to help the families to be able to cope and survive and be part of the progress of recovery and not an antagonist. I did things wrong because I didn’t know better and I didn’t know how to embrace my child.”

The southwestern chapter of Families Against Narcotics meets the first Thursday of each month in Kalamazoo at the Urban Zone, 625 Harrison, 7-9 p.m. The Calhoun chapter of FAN meets the second Tuesday of the month in Marshall at Crossroads Church, 717 U.S. 27 North, 7-9 p.m.