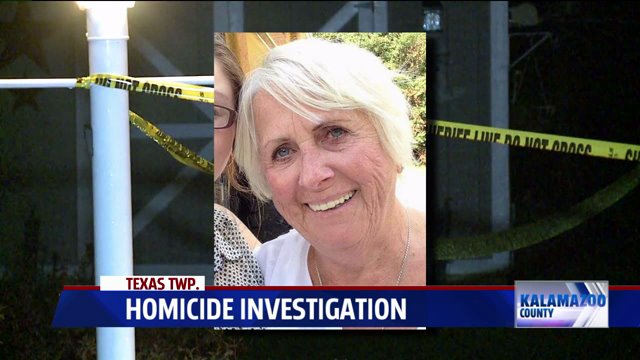 TEXAS TOWNSHIP, Mich. – A brutal crime, allegedly between ex-husband and wife, is shocking a quiet neighborhood in Texas Township.

Family of Grace Thrasher, 74, confirm that she was shot to death Monday morning, and believe her ex-husband killed her.

Around 1:30 a.m. Monday, first responders got to Thrasher’s home in the 6100 block of Poppy Street in Texas Township. Officials found Thrasher injured, and she later died in her home.

Thrasher’s granddaughter Brittney Turberville told FOX 17 that Thrasher’s ex-husband left the scene and went to his son’s house across the mobile home park and confessed. Turberville said Thrasher’s ex, her grandfather, was an alcoholic. For years, she recalled him saying “I’m going to kill her,” speaking of Thrasher.

Police arrested the ex-husband Monday; he is awaiting arraignment, which is expected to happen Tuesday.

“We have a suspect, we have a weapon, and I want the neighborhoods to understand that there’s not someone out there on the loose that we’re looking for,” said Kalamazoo County Sheriff Richard Fuller.

Lynne Bennett told FOX 17 News that just over the weekend she sat with her dear friend Thrasher outside of her home in a swing. Bennett did not know it would be the last time they would catch up, and she asked Thrasher if she was alright.

“We’re gonna miss her,” said Thrasher. “She was a really good neighbor. She’d give you the shirt off her back, she really would.”

Bennett said Thrasher was working hard, in her mid-seventies, at a new job in Mattawan and enjoying it.

“She was working, saving up to get a new car, you know even in her seventies to work like that,” said Bennett. “And she loved it, she loved her job, she thought it was just a great place to work.”

She said Thrasher was always smiling. Several neighbors said Thrasher would bring them over dishes, swap recipes, and enjoyed walking her dogs in the neighborhood.

Turberville said her grandparents were divorced about 15 years: Thrasher was living in Georgia and recently decided to move back home, and moved in with her ex-husband “out of convenience.”

Bennett said Thrasher just told her that her ex would yell at her, but as of recent that was it.

“I don’t know that the verbal abuse would escalate to being killed,” said Bennett. “I really didn’t realize that. And maybe, if someone is living with someone that verbally abuses, maybe they should talk to somebody.”