“To College, Through College” summit held in Downtown Grand Rapids 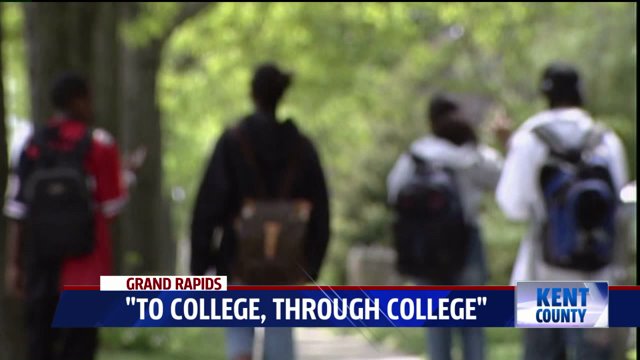 “Grand Rapids ranks  number two in the nation in the growth rate of population with higher education degrees," Heartwell said.

So the city and several community groups are spearheading the "To College, Through College" initiative. They held a discussion at Western Michigan University's satellite campus in Downtown Grand Rapids. A variety of community organizations, including colleges and universities across West Michigan brainstormed ways to help students earn their degree or some type of post secondary credential.

During the day, barriers college students face took center stage. From financial, to cultural, outside influences, role models, to support systems or a lack thereof.
The disconnect that may exist between students and valuable community resources was also discussed.

According to the National Student Clearinghouse, about 18% of GRPS graduates earned a college degree in a 6-year period. The initiative's goal is to increase that to 40%.

Dr. Rhae-Ann Booker is the chair of "To College, Through College."

About the "To College, Through College" initiative

She said, "Those students need to know that they live in a community that genuinely cares about their future and not just through rhetoric, but through the action, through the support and services that we provide."

"We touched on some community resources that aren't really meeting student needs and how the community can better assess those needs," Przybylski said.

She added that they discussed "what students can do to better empower themselves." Students answered questions like what motivated them to go to college and what kind of support do they need to finish.