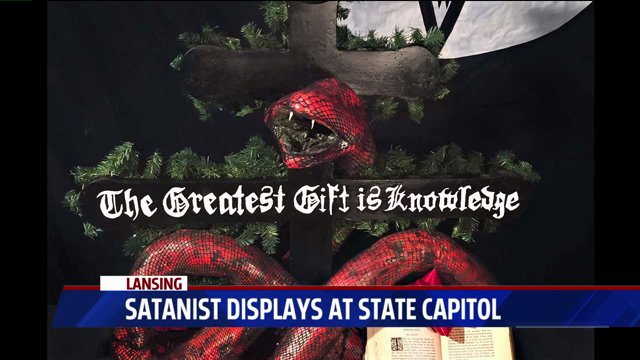 LANSING, Mich. – A “Snaketivity" scene will be on display on the north front lawn at the State Capitol from Dec. 21 to 23.

Capitol grounds policy allows any group to apply for a temporary display that must be put up after 6 a.m. and dismantled daily by 11 p.m. According to policy, "Snaketivity" follows the rules.

Capitol Facilities Director Dan Brocklehurst told FOX 17 that the Satanic Temple of Detroit applied early December and was approved to put their display on the lawn for three consecutive days.

“Whether we think it’s right or wrong, they still have that ability to carry that out and we cannot discriminate against their freedom of speech," said Brocklehurst.

The display will be a three-foot by three-foot red snake wrapped around a pagan cross with the statement, “the greatest gift is knowledge.”

According to organizer Jex Blackmore with the Satanic Temple, the snake represents the birth of human enlightenment and liberation, which they said is analogous to the Nativity scene symbolizing the birth of Christ. Blackmore said it deserves to be on state grounds.

"The holidays tend to be a time when families and friends come together in conversation," said Blackmore. "Perhaps this time of year, it's best to involve conversations about divergent beliefs, Or about some larger context going on in America."

State Senator Coleman Young, Jr. said anyone has a right to be offended by this display, but it's their First Amendment right; something that should not be debated.

“My major concern is I just don’t think that right now you should be having legislators debate that when we have real issues going on," said Young.

"Our roads are falling apart, they look like something out of the Book of Eli; you got major programs that you need to deal with in terms of joblessness, in terms of hunger, in terms of poor people. I just don’t think that this is the area right now where we need to have this debate," said Young.

Brocklehurst told FOX 17 that once this display was approved, he received nearly a dozen calls from groups working to display a Nativity scene on the south front Capitol lawn.