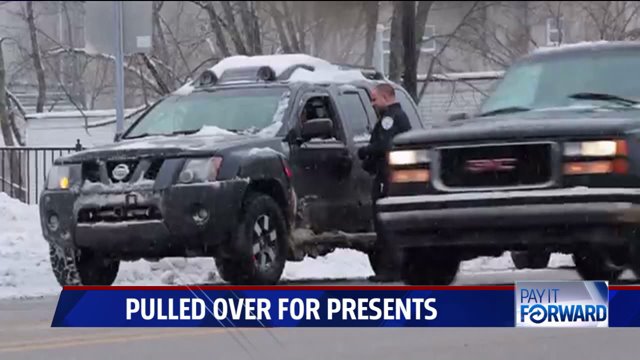 LOWELL, Mich. -- The Lowell Police Department joined UP TV to pay it forward to some unsuspecting drivers this holiday season.

It was part of Uplifting Entertainment's Uplift Someone campaign.

While making traffic stops over two snowy days in November, an officer asked unsuspecting drivers about their gift-giving plans.

And because there's no such thing as a routine traffic stop, Ofc. VanSolkema says you never know what's going to happen next.

"Some people were nervous," he explained. "Some people didn’t want to be stopped by us, especially when I told them what the infraction was. They just wanted to get out of there."

While the department's intention wasn't to give out a ticket, it was difficult to get the information Ofc. VanSolkema needed.

"It was a police interrogation," he said. "Granted, it was for a good cause, but it was also difficult, 'cause not everybody, especially in mid-November, knew what they wanted for Christmas or who they had to buy for."

You can watch several traffic stops and the driver reactions below.

All of the gifts and production were paid for by Up TV. Rob Bliss and his crew shot and produced the video.

VanSolkema says the department has since received thank you notes, Facebook messages and correspondence from folks who were not directly impacted but knew someone in the video.