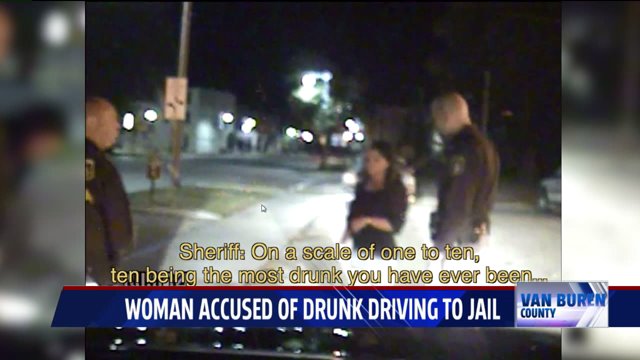 PAW PAW, Mich. -- She was arrested for drunk driving after deputies spotted her in the county jail parking lot.

April Loomis of Hartford was arrested in the early morning hours of October 19 after she told deputies she thought she'd parked in front of another bar, according to the Van Buren County Sheriff's Department. Turns out, she was right in front of the county jail after an argument with her passenger.

Dash cam video shows deputies approaching the woman after hearing her argue with a man who got out of her car and began walking away.

She immediately admitted she had been drinking "a few."

"What is a few to you?" asked the officer.

Despite admitting to slamming down booze, she still said that she was in control.

"Do you feel that you are intoxicated at all right now?" asked the officer.

"Okay, on a scale of one to ten, ten being the most drunk you've ever been and zero being not intoxicated at all, where do you put yourself right now?" asked the officer.

Deputies asked her several questions about where she had been earlier in the night but didn't believe she didn't drink the hard stuff.

"Sure you didn`t have anything more than just beer?" asked the officer.

"No. Absolutely not," answered Loomis.

"No vodka?" asked the officer.

"I feel like I can smell vodka coming off you," said the officer.

When it came time for a field sobriety test, officers said that she needed a little help to keep her balance while taking off her high heels. She can be seen in the video leaning on the deputy.

While waiting for the results of the sobriety test, the officer asked the question of the hour. "You know why you drove to the parking lot of a sheriff`s office?" asked the officer.

The results of the breath test allegedly showed a 1.82 reading. A reading of .08 is the legal limit for driving.

Sparing a trip in the back of a patrol car, Loomis was directly to take a short walk of about 50 feet to the entrance of the jail from where she pulled into the jail's lot.

Loomis was released from jail a few hours later.

According to deputies, she is charged with operating a motor vehicle while intoxicated as the second offense. She's due back in court in December.