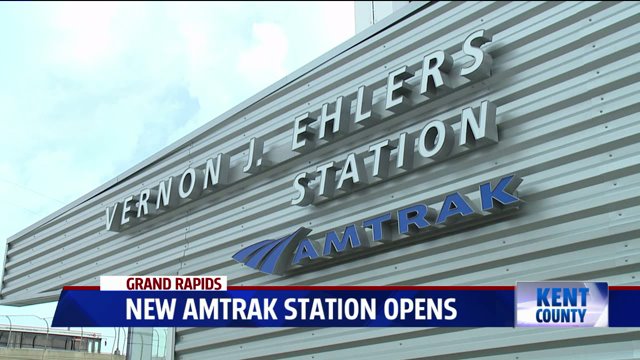 GRAND RAPIDS, MICH. -- It's now a little easier for West Michigan residents to travel by rail all around the United States. That's because of a $6.1 million Amtrak station in downtown Grand Rapids.

It was a New York state of mind in Grand Rapids Monday as the Amtrak Pere Marquette train to Chicago departed the new multi-million dollar station for the first time.

"A station that's expandable, that's easy to use, a station next to transit, a station more accessible for people with disabilities. This station is all that and more," said Marc Magliari, an Amtrak executive.

More than 5,000 people traveled through the old Amtrak station each year. One of them was DJ Lubs, who uses the train to travel back and forth to Chicago to visit his brother.

"I think it's a lot more noticeable, too, and it's not so much of an eyesore, I guess you could say," Lubs said. "I think it fits the city really well."

The station bears the name of former congressman Vernon J. Ehlers, who helped secure the transportation funds to build the facility. Grand Rapids Mayor George Heartwell sees the future of the station as making a significant impact on the city's economy.

"Right now all those poor people in Chicago can't get up to Grand Rapids first thing in the morning to do their business or to eat in our restaurants or drink some of our fine microbrews," Mayor Heartwell said. "They have to wait until night to come to Grand Rapids, so two round-trips a day would be very, very helpful to our economy."