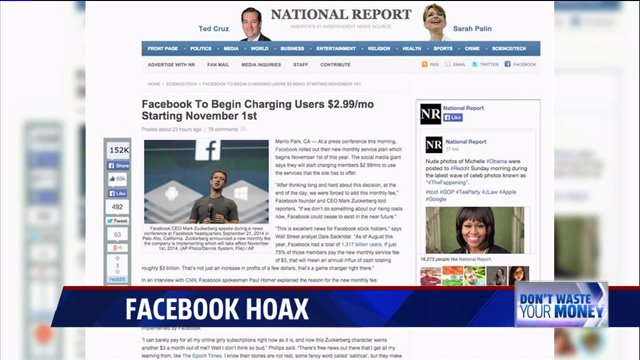 Thousands of people have been expressing outrage over news that Facebook may soon charge a membership fee.

Only problem: It's all fake, and is part of a growing number of phony news reports.

The headline went viral hours after its posting, and no wonder. It says "Facebook to begin charging users $2.99 a month starting November 1st."

Normally, most people would ignore posts like this on social media.

But this one was different: It links to a full news story on "The National Report,"   complete with quotes from Facebook CEO Mark Zuckerberg about the fee.

People across the country posted the news report on their Facebook feeds, and thousands more complained to Facebook, all over a news report that was a complete hoax.

The quotes attributed to Zuckerberg? All made up.

And from the "Doesn't That Stink" file, the growing number of fake news reports online.

The National Report is among a number of satirical news sites.

Many, like The Onion, are clear that their reports are satire. But the National Report is much less clear, and many of its stories tend not to be very funny.("Terrorists using Ebola" is hardly a knee slapping satirical story.)

Believe one and share it and you may say "Doesn't That Stink?"

My advice: If someone tells you something significant is happening, look it up before sharing or retweeting it.

Fake news sites should also be clear that their reports are phony.

That way you don't end up looking like a fool, and you don't waste your money.